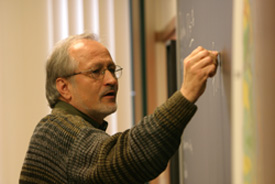 A native Hoosier and former newspaper reporter, I taught at Wittenberg for more than 30 years.  I specialized in the history of Japan's Meiji era (1868-1912), particularly the role of the newspaper press in bringing average citizens into Japan's political life. In the classroom, I taught the whole of East Asian history, everything from China in the age of Confucius to Japan under the samurai, on to Korea's divided era.

Since retirement, I have lived in Chicago, where I continue to do Japanese history. In addition to three textbooks (Japan in World History, Modern Japan: A History in Documents, and Japan and Imperialism), I have published Down and Out in Late Meiji Japan (University of Hawai’i Press, 2018), a study of the daily lives of slum dwellers in the late Meiji years. A collection of my works also has come out: The Rise and Evolution of Meiji (Renaissance Press, 2019). And in 2020, I taught for the third time on the Semester at Sea program. Far the most important facet of my life is my family: James, Nao, and two grandchildren in Tokyo; and Kristen, Dave, and two grandchildren in Chicago. I also usher about once a week in Chicago theaters and do volunteer work with labor and with detained immigrants.