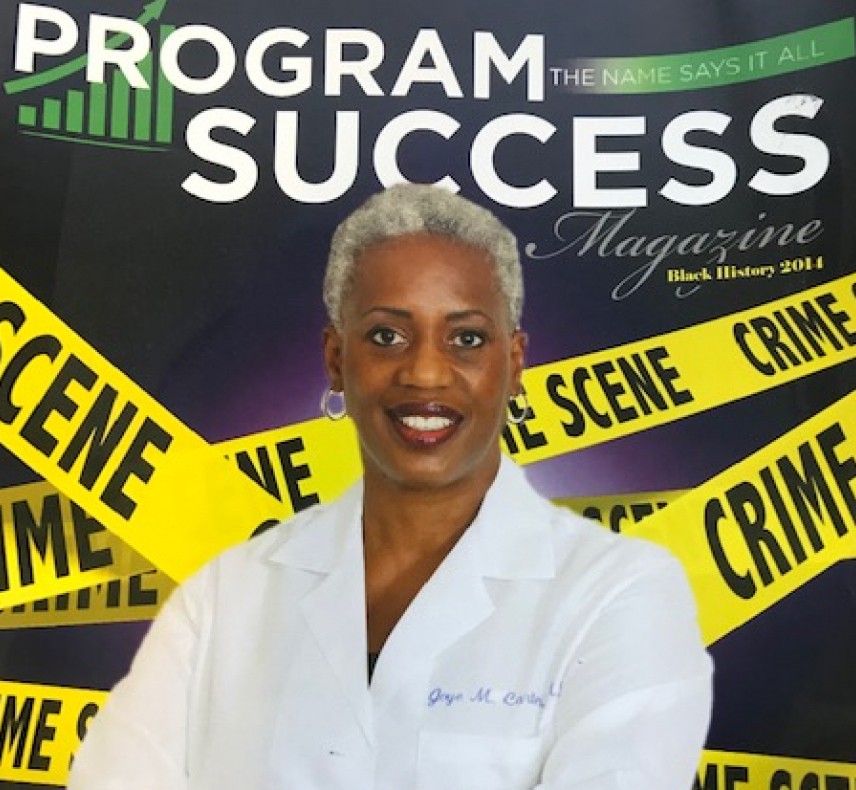 Speaking for the dead is something that Joye Carter, Wittenberg class of 1979, feels is her duty as a medical examiner and forensic pathologist. Along the way, she has also managed to speak loudly for minorities, all while accomplishing many firsts throughout her life.

Originally from Wellsville, Ohio, Carter is currently the first full-time forensic pathologist in San Luis Obispo, California, as well as the first female and the first African American to hold the post, according to her website.

“I knew when I was in high school in Indianapolis, Indiana, that I was going to become a forensic pathologist,” said Carter, who earned her medical doctorate from Howard University in Washington, D.C., in 1983 before serving in the United States Air Force from 1989-1992.

“I discovered the field while being introduced to health care careers as a sophomore,” said Carter, who found a job at the local hospital and became acquainted with the morgue. “Then in college, while I was working as a lab assistant, I witnessed my first autopsy. It was exciting to learn so much through examinations without ever talking to a patient. And that was it for me; I knew what I was going to do, and I would never be persuaded to do anything else.”

Headquartered in Washington, D.C., Carter worked for the Armed Forces Medical Examiner Department. Earning several promotions, she quickly rose to the rank of major in the military all the while becoming well-known in the medical examiner field. Washington, D.C. had a need for a permanent medical examiner and pursued Carter, asking the military to resign her commission early so she could work for the District of Columbia.

After serving as a military medical examiner and chief medical examiner in Washington, D.C., and in Houston, Texas, Carter formed a private consulting firm to allow both defense and prosecuting attorneys to access her experience.

“I have always loved my career and type of medical practice,” said Carter, who has been board certified in general pathology and forensic pathology since 1989 and 1990, respectively. “I feel it is the basis of medicine in general. I speak for the dead and tell their story. The best witness to a death is the dead body, so I have to interpret their story by performing a full examination and medical record review.”

Carter is also the author of two books: My Strength Comes from Within, an autobiography, and I Speak for the Dead, which examines what family members experience after the loss of a loved one. Carter also wrote a monthly newspaper column, was involved with the Houston Medical Forum, the Gulf Coast Sickle Cell Association, and developed a teen driving program in Houston. During her time at Wittenberg, Carter was a member of intramural sports football team, Beta Beta Beta, and Concerned Black Students. She also cofounded the Experimental Dance Troupe, and tutored athletes and local high school students.

Carter recently took time out of her busy career to answer a few questions for Wittenberg.

Wittenberg: Tell me about your career as a medical examiner.

Wittenberg: I’ve heard you do a lot of public speaking. Might you share a little about what you talk about and your efforts to help defeat some of the threats to the black community?

Carter: I have been a professional speaker for more than 30 years and enjoy sharing information with many sources. As a forensic pathologist, especially a chief, I am aware of many threats against all of the communities. I have been particularly concerned about the death rate among African Americans. I try to enlighten the population about what is causing premature deaths. Death is the major factor in diversity. I constantly lecture on drugs and alcohol, gun violence, suicide, hygiene, and nutrition. Often many types of diseases can be linked to personal pathology of tobacco use, alcohol abuse, nutritional intake, etc.

Carter: Wittenberg was part of my pathway. My mother attended Mount Union, and she wanted me to attend an Ohio Conference school. I attended Wittenberg on an academic scholarship. I excelled in science and was able to take all of the required pre-med curricula plus independent study as a student at Wittenberg. I also joined the USAF because of a job fair at Wittenberg. I was more than prepared for medical school and already had the basic science courses from the first years of medical school.

Wittenberg: Can you recall a story or moment growing up that helped to shape your current interests, activities, and/or career pursuits?

Carter: My early years as a middle school student were marred by being made fun of by my teacher. I knew at that stage I would have to be my own advocate and be true to my aspirations and life goals - something that I continue to do. I was used as the introduction to African history in an all-white class, but I turned it into a lecture on melanin and its protective nature of black skin based upon a study that I read about in Ebony magazine. From that point on, I knew that nothing would get in my way.

Wittenberg: Who or what do you believe made the biggest impact on you and your time at Wittenberg?

Carter: I was a science major and my career path was set. I discovered a strong love of music while at Wittenberg and enjoyed the strong academic background and ways of self-care with art and music. I believe that I benefited from the smaller class sizes and availability of the professors at Wittenberg. The one thing I loved about Wittenberg was the beautiful campus and red brick buildings that were somewhat idyllic in sorting out thoughts as a young woman. I always encourage young people to develop their sense of self and finding a mentor who both like what they do and are willing to share their experiences.