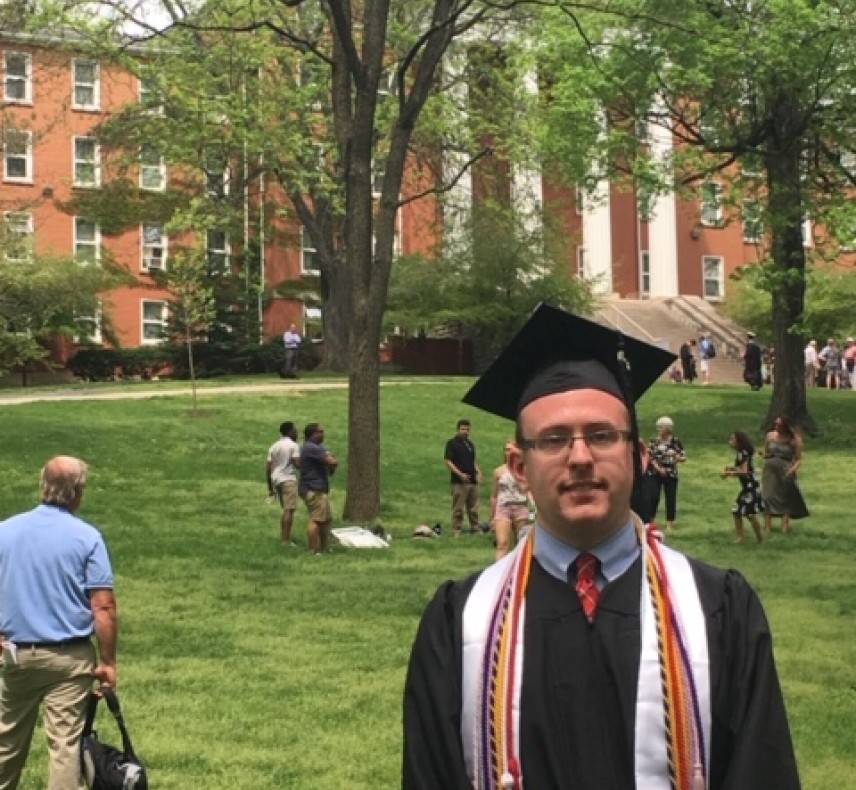 For Ben Knochel, Wittenberg class of 2018, Wittenberg offered him all the opportunities he wanted to pursue — and he did.

Knochel, from Cincinnati, Ohio, graduated last May as a double major earning both a bachelor’s degree in mathematics with a concentration in statistics and another degree in German with a minor in music. Each major has allowed him to achieve his goals early in his young life.

“Both of my parents and my brother went to schools in our same sports division (NCAC schools DePauw and Wabash),” said Knochel, who played the bassoon in the Wittenberg Symphonic Band and was a member of Lambda Chi Alpha fraternity and Alpha Phi Omega service fraternity during his time on campus. “I chose Wittenberg instead because of the Wittenberg-in-Wittenberg, Germany, program,” he said.

Knochel said he managed to time things right so that he was in Germany for the 500-year anniversary of the Reformation when Martin Luther nailed his 95 Theses to the doors of the castle church in Lutherstadt-Wittenberg.

"The trip definitely had the most impact on my life during my time at Wittenberg. Working in the mayor's office also improved my German skills drastically, and spending all of my time abroad in Europe was a very fun time in general. I would absolutely recommend studying abroad while in college.”

No stranger to cultural immersion, Knochel said his family hosted several German exchange students while he was growing up, which developed his interest in studying German. Adding to his interest was the fact that his ancestors were German on both sides. After traveling to Germany a few times in his life, Knochel made it a goal to become the first bilingual person in his family. His adventurous spirit to travel overseas was also fueled by his father, an emergency room physician, who took the whole family on mission trips with him.

“When I was a teenager, my father took us on a mission trip to India,” he recalled. “We served at a Christian orphanage for young girls who would have been sold into bad situations. It was one of the more eye-opening experiences that I had because we saw 'true' poverty. It shaped my views of service and volunteering. The community service requirement at Wittenberg caught my eye, too, so that greatly influenced my decision to choose Wittenberg as well.”

After graduation Knochel accompanied his father on another mission trip, this time to Haiti, where his math skills were put to good use.

“The mission trip to Haiti was something that my church started doing more recently,” said Knochel, whose mother was a math teacher. “Mostly people with a medical background go to help out with a mobile clinic that is part of the mission there. The person in charge builds churches in remote areas of the country that are very poverty stricken and without access to any healthcare. My dad has been going every year since they started about three years ago. They were short on people, so I went along. We set up a 'mobile clinic' in more remote villages so we could help out the people. I was the only one without medical experience, so I became the pharmacist and counted pills for a week. As it turns out, studying math helped me count out pills very quickly and efficiently, so I felt like I was contributing.”

His math and statistics skills also led him to his current position with Medpace, a contract research organization located in the Cincinnati area. As a data standard analyst, Knochel maps data for pharmaceutical studies before it is sent to the Federal Drug Administration (FDA) and other regulatory agencies.

“It's largely a data science position with more coding involved than statistics,” said Knochel, who recently started playing bassoon with a local group called the Westside Community Band. “I basically have to make sure that any data pertaining to the drug trials that Medpace is a part of is sent to the FDA and other regulatory agencies according to the proper formats. The training took about two months to complete because there are a ton of rules that I have to follow before all of the data gets submitted.”

The company also has locations in Germany, which interests Knochel greatly.

“This is definitely a wonderful start to be able to work for a growing company that does have offices in Germany. The work is challenging and different for every pharmaceutical drug trial,” he said.