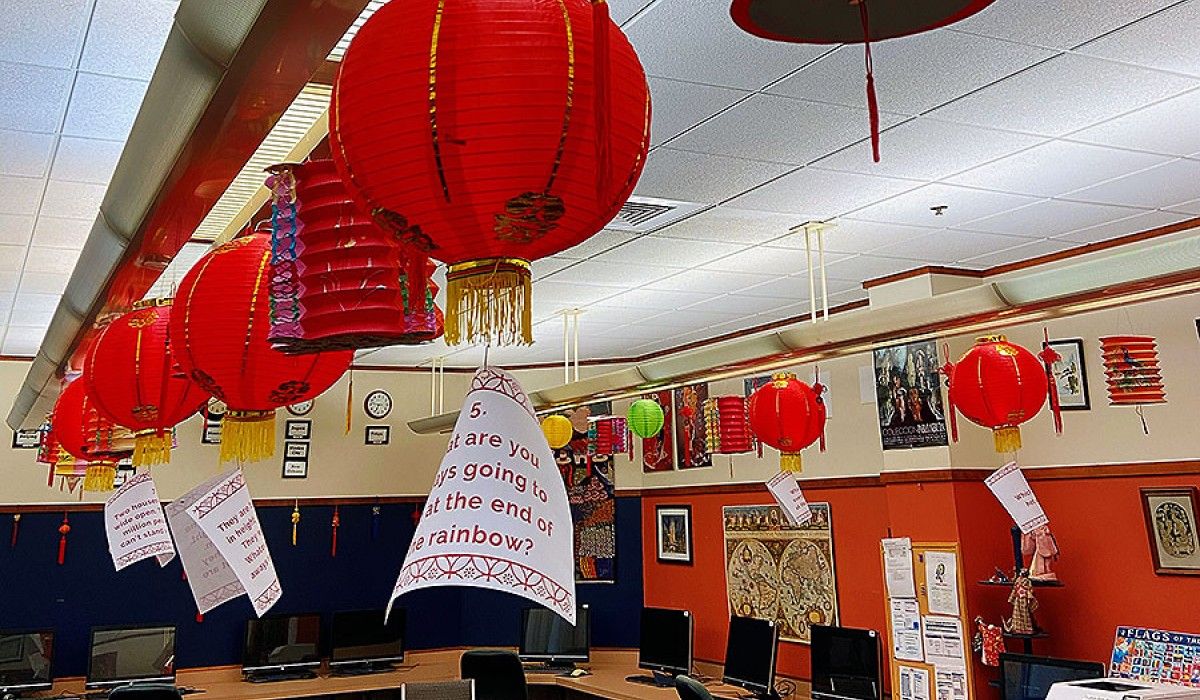 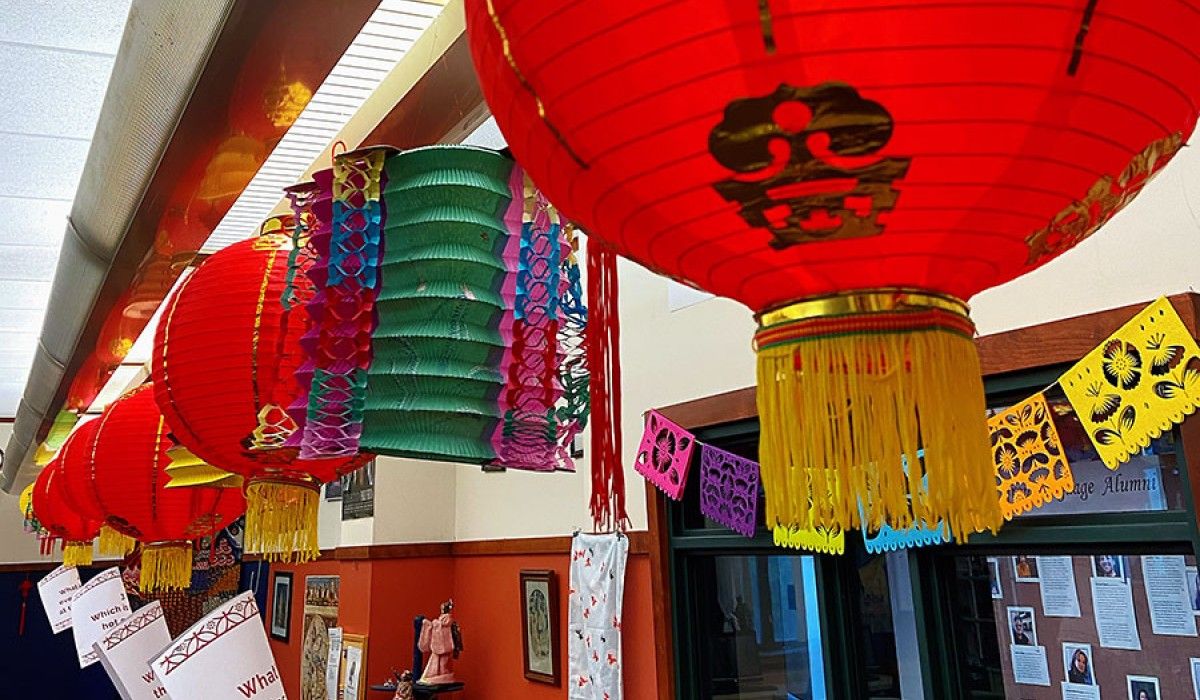 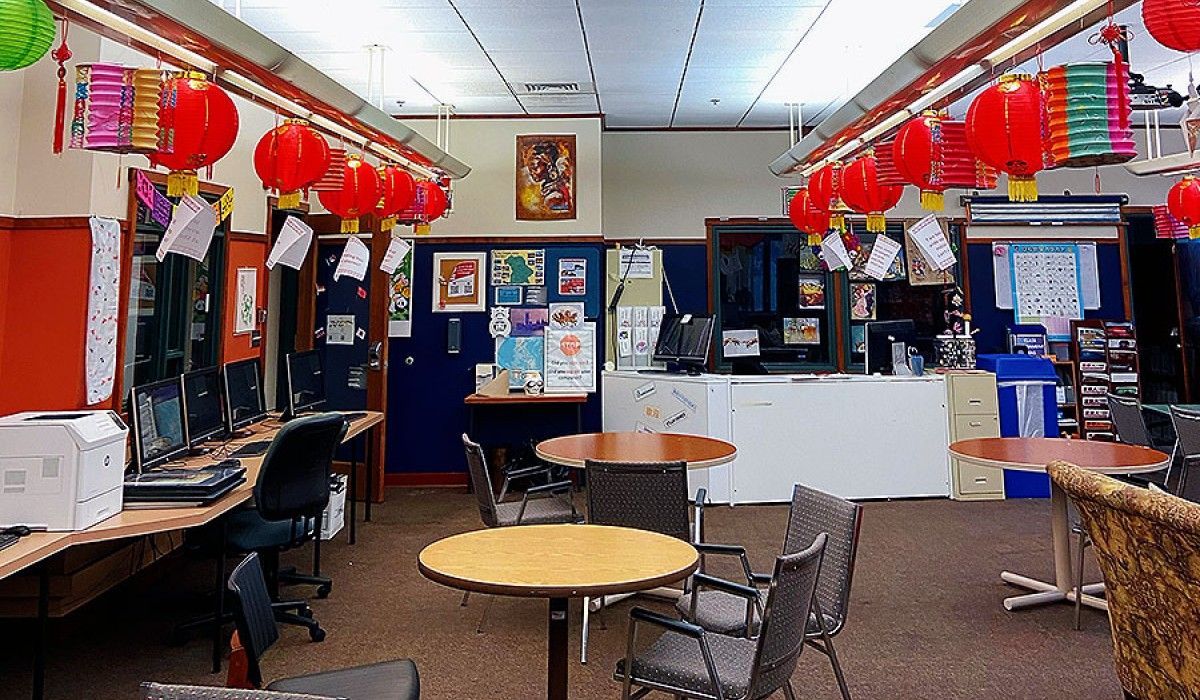 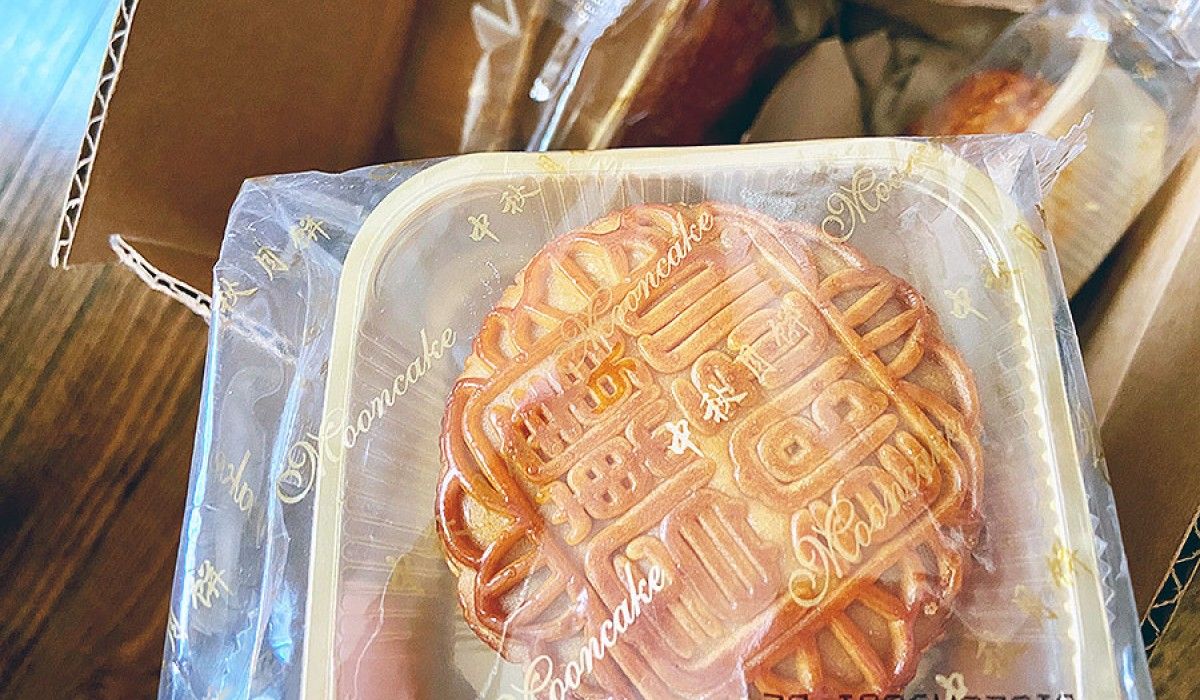 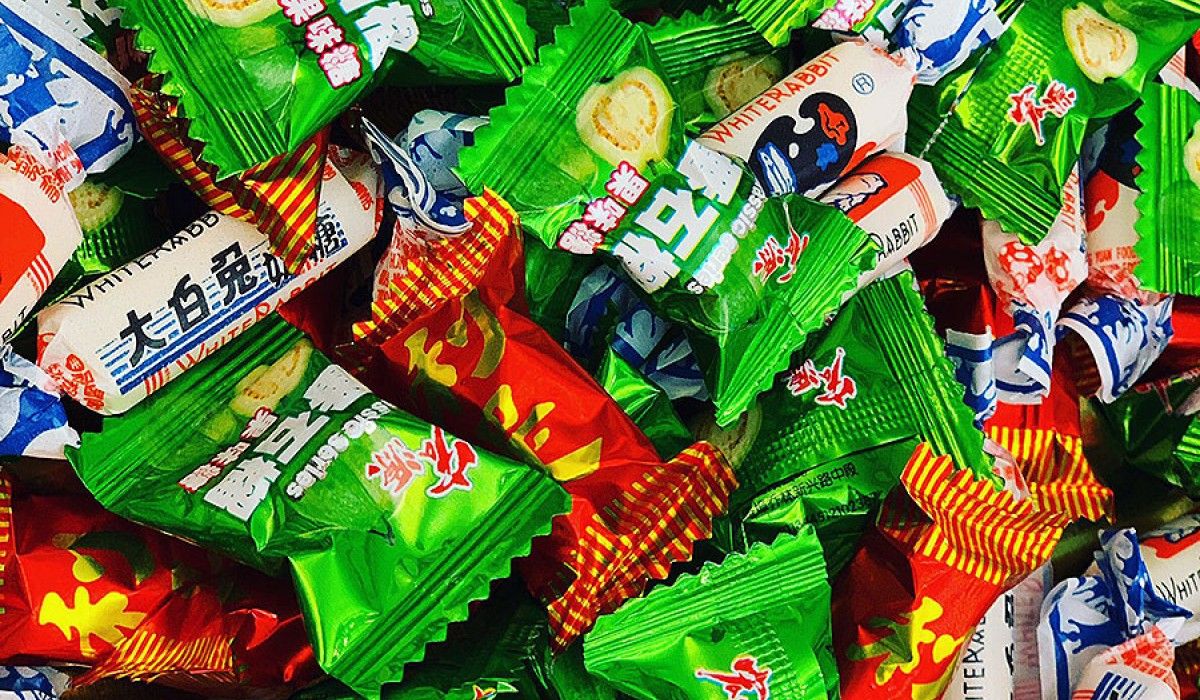 Together with East Asian Studies Club, LLC held a Mid-Autumn Festival celebration. It is a Chinese holiday where people gather as a family, eat mooncakes (a Chinese pastry), eat delicious dishes, and solve riddles on lanterns. We decorated the Language Learning Center (Hollenbeck 231) with lanterns and riddles for people to come and solve them. Students can solve them you can check the answers with the Chinese tutors and get some candy! The celebration lasted a week at LLC. (Scroll through the photos in the slider above)

East Asian Studies put together a phenomenal performance of 12 ghost stories enacted by students (and professors) in Chinese and Japanese classes from the works Tales of One Hundred Ghosts (by various authors including Tsuruya Nanboku IV, Asada Iccho, and Tamenaga Toarobei I) and Strange Tales from a Lonely Studio (by Liaozhai zhiyi). The students worked hard to bring to life these spooky tales of no-faced demons, vengeful devils, ghosts back from the dead, monkey kings, and ghoulish cat- (Bakenoko) and snake-monsters. After each story's performance, one representative from the story blew out 1 of the 12 lit candles (evoking a popular game / test of courage in Japan from the Edo period called Hyakumonogatari Kaidankai), which lead to a spooky finale once all the lights went out.

Students participated recently in a board game night sponsored by the anime club and the LLC. Although most of the games featured a competitive (versus a cooperative) element, students still enjoyed the cultural aspects of the games. In Carcassonne, for example, players had the chance to construct and expand cities, roads, and cloisters in the French countryside. Machi Koro, developed by Masao Suganuma, allowed players to develop theme parks, harbors, bakeries, and factories as mayors of developing towns. Tsuro of the Seas, a game that represents “the classic quest for enlightenment” (McMurchie, 1979), helped players navigate the Mystic Seas as captains of one of the Emperor’s red seal ships while avoiding dangerous winds and Daikaiju. Two other games, Chrononauts (a time-traveling game about altering history) and Boss Monster (a game about building a dungeon to destroy would-be heroes), were also featured. Next time, the LLC would love to feature its Bananagrams multilingual edition, Ticket to Ride, and Deception in Hong Kong to continue appreciating board games about other cultures and countries. 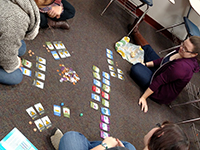 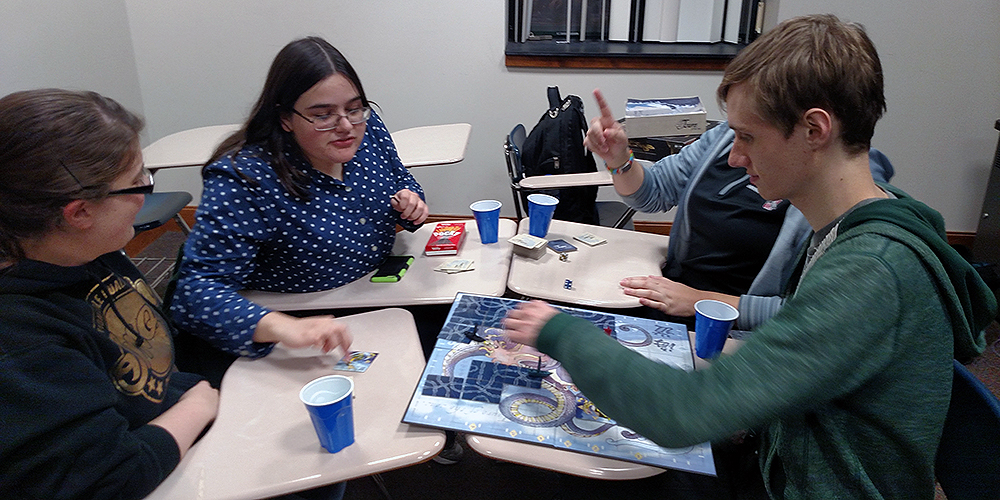 The LLC held a cozy holiday celebration with homemade hot apple cider, panettone pastry, and Mexican rice pudding. We started our December advent calendar, and participated in a small White Elephant gift exchange. One of the highlights of the night was a Polish tradition from Dr. Zuidema's family that she shared with students: Each person takes an Oplatki wafer and finds a partner. The first person breaks off a little piece of their partner's oplatki and wishes them good luck on the coming year, looming finals, or upcoming challenges; mentions 1-2 favorite memories with the other from the past year / semester; and shares a personal message as a way to acknowledge the other person and strengthen their friendship. The second person then reciprocates and then both find new partners to talk to. Following the contest for best "ugly" sweater, some arts and crafts at making and painting snowflakes, and a White Elephant gift exchange, students played a few board games to end the night. 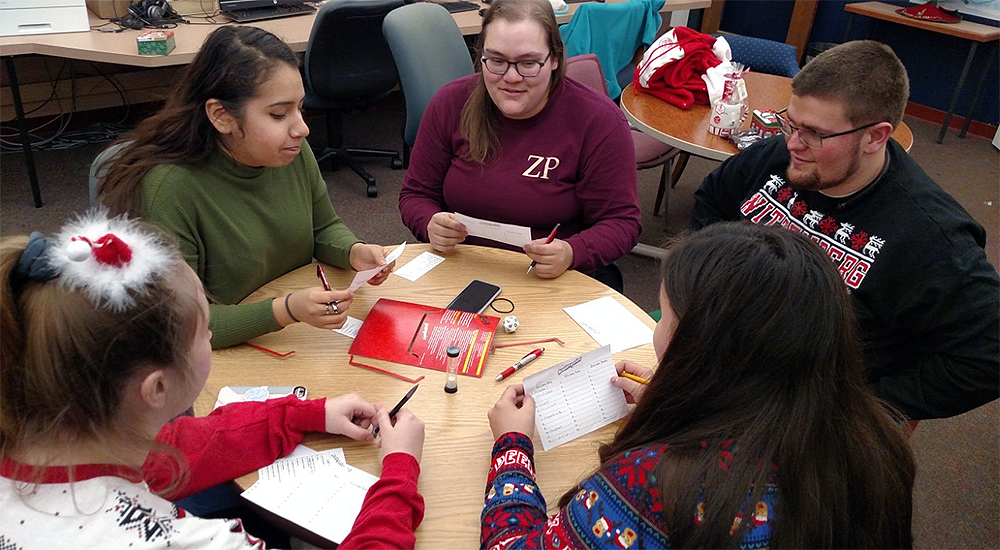 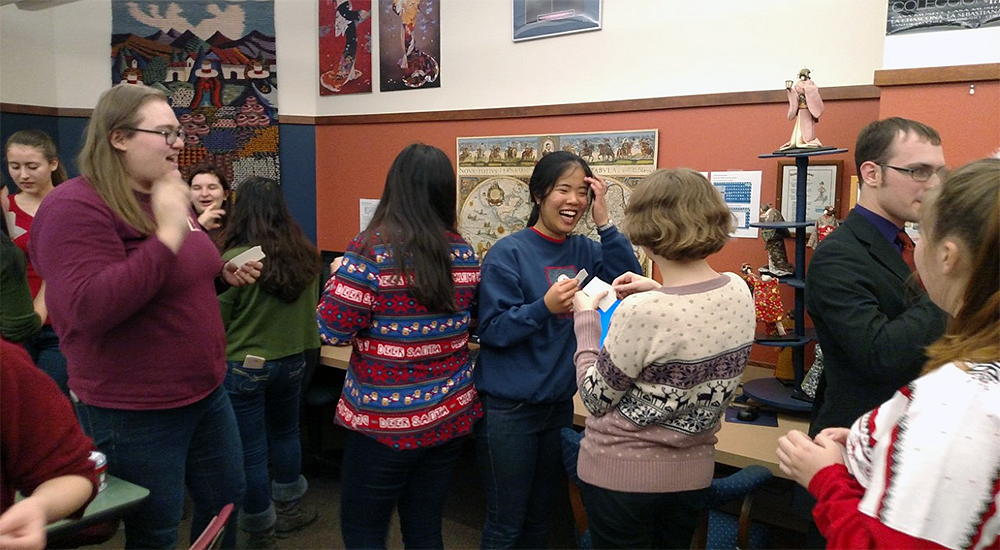 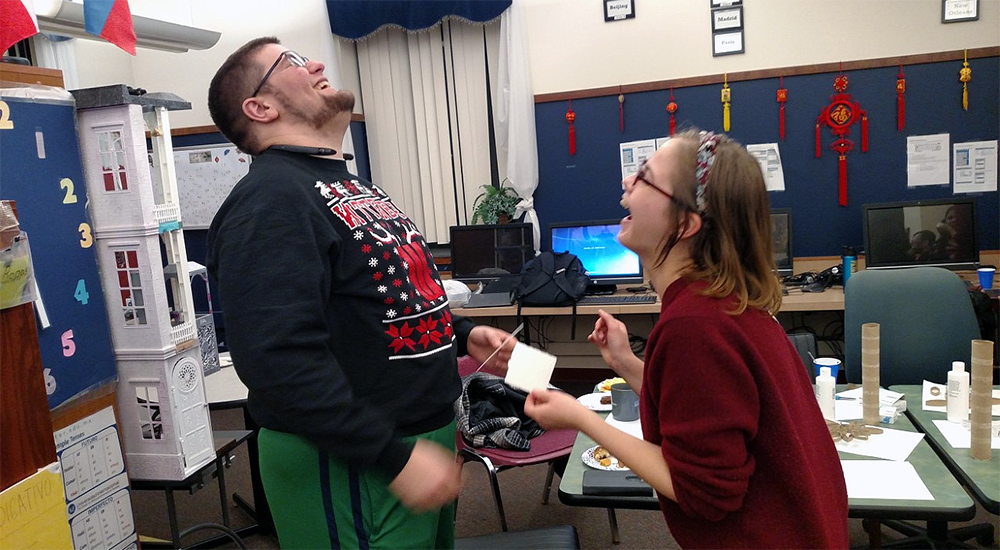 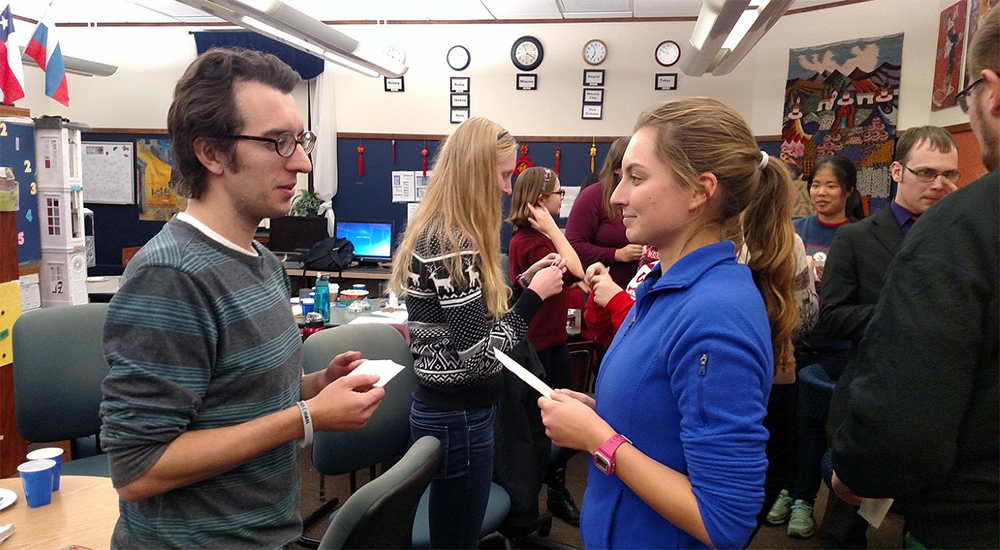 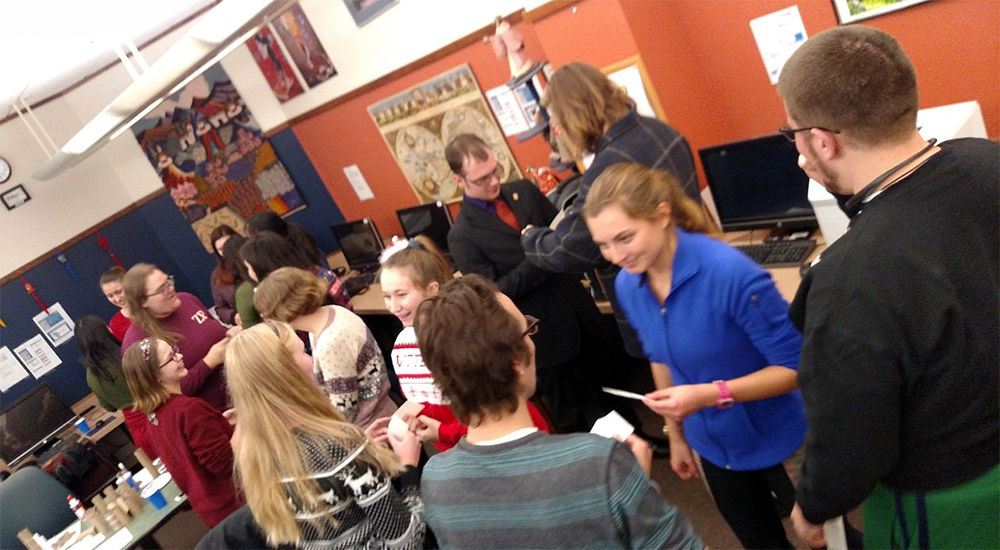 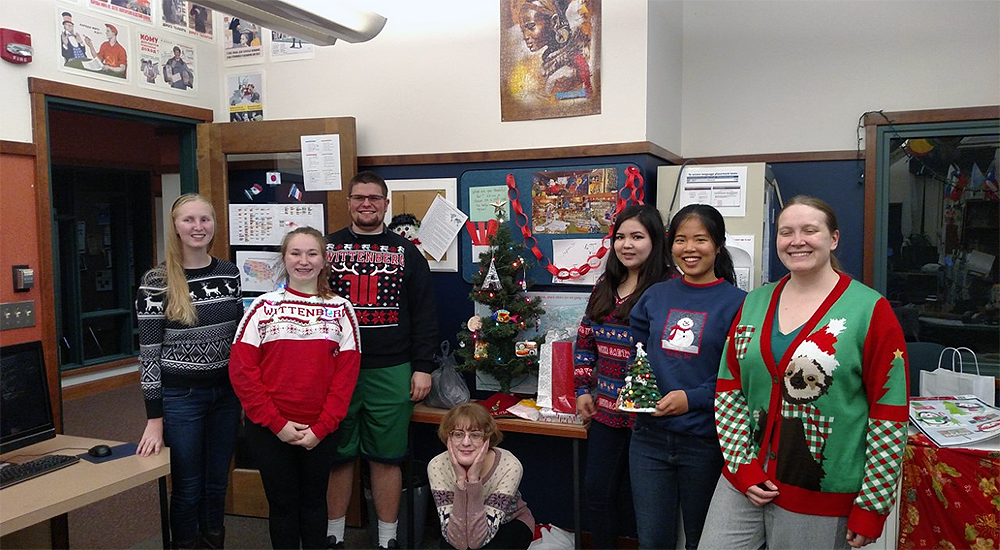 Wittenberg University welcomed a Japanese comedian to its campus for a unique cultural experience. Sponsored by the East Asian Studies Program, the World Languages and Cultures department, the Theatre and Dance department, and the International Studies program, this event offered participants insight into Japanese comedic performance. The Japanese Rakugo-ka, Showto, kept us entertained and in stitches during his performance in the Geil Lounge. Using only a fan and a folded cloth, Showto flipped the tradition of "seeing is believing" to invite us into his world of make-believe. He threw invisible apples at us to eat and helped us explore aspects of Japanese culture (Udon noodle making and eating was a fan favorite!).

Rakugo performance typically embraces a story-telling approach in which the Rakugo-ka will adopt different voices and gestures to convey different characters, all from the seiza sitting position. His jokes included numerous examples of punny wordplay. (Examples: Q: What pet is the loudest pet? A: A trumpet). Dr. Choy and Dr. Zuidema were both invited up to translate stories from English into Mandarin and into Spanish for the audience, taking on the voice and gestures of talking flowers and a flower vendor. Towards the end of the event, students and professors (Dr. Choy, Dr. Zuidema, and Dr. Imai) were all a part of the comedy routine by acting out a story about a precocious child desperately wanting some ice cream. 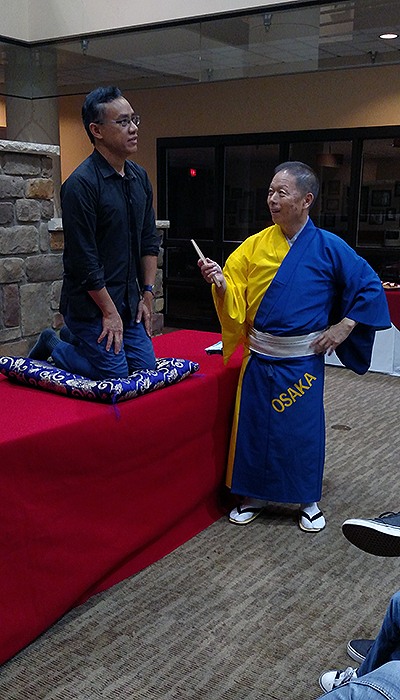 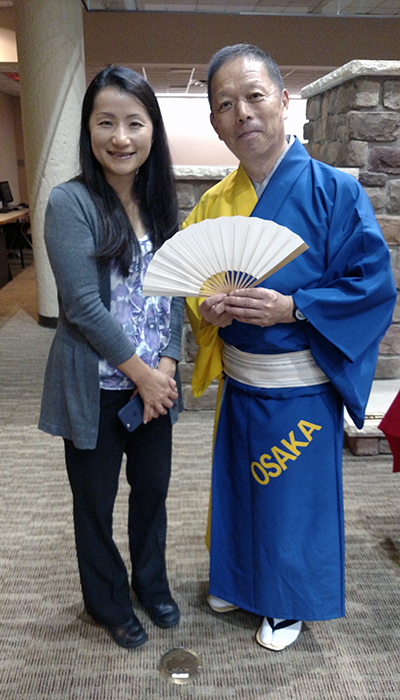 The LLC celebrated Oktoberfest with some fun aspects of German culture, and received an unofficial OK from our two professors of German.

Participants listened to traditional Oktoberfest music, decorated Lebkuchen gingerbread cookie (which are becoming a staple souvenir of Oktoberfest in Germany), sampled different flavors of root beer, spaetzle (dumpling-like noodles), kluski (egg noodles), wiesenhendl (roast chicken), and pretzels, colored some pictures for the bulletin board, and watched a live-stream display of the Wirtsbudenstraße Oktoberfest. 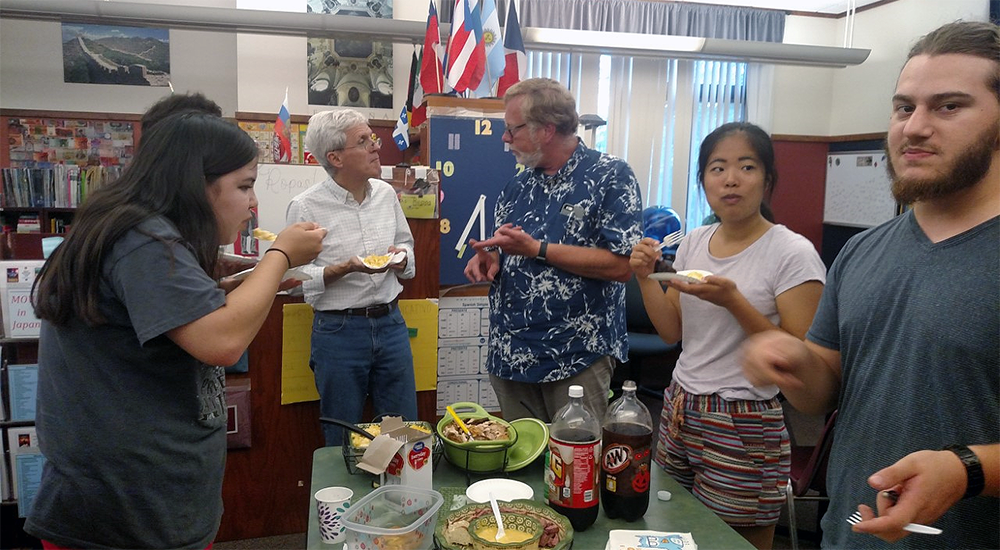 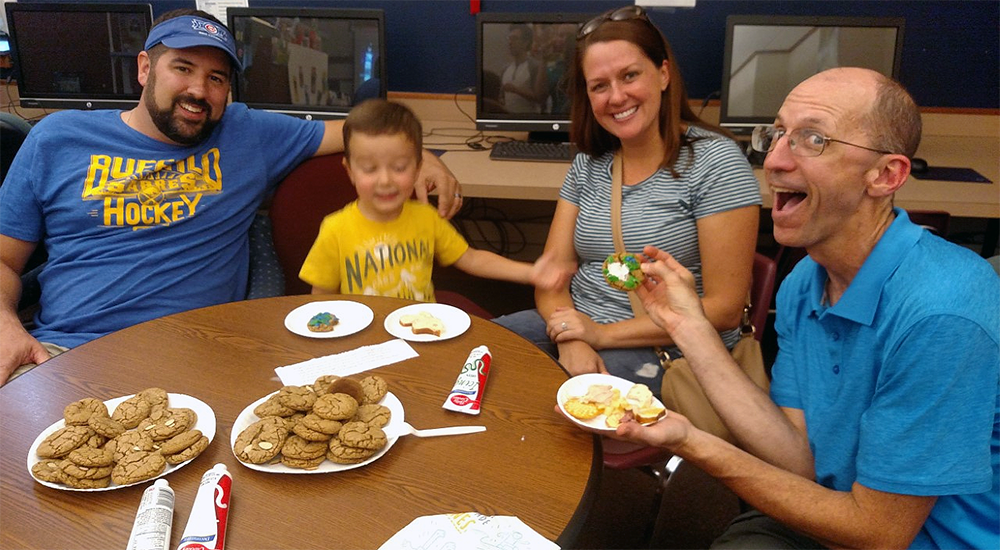 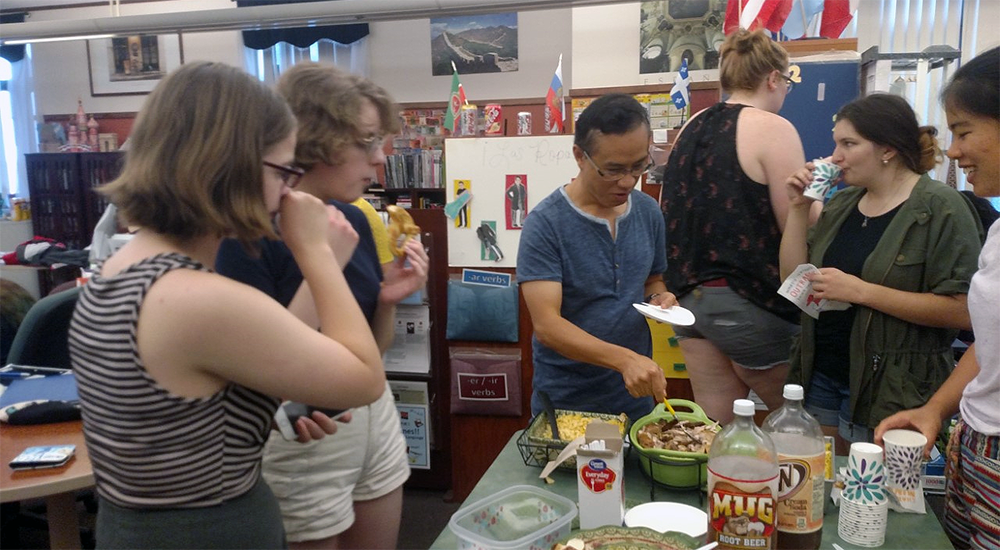 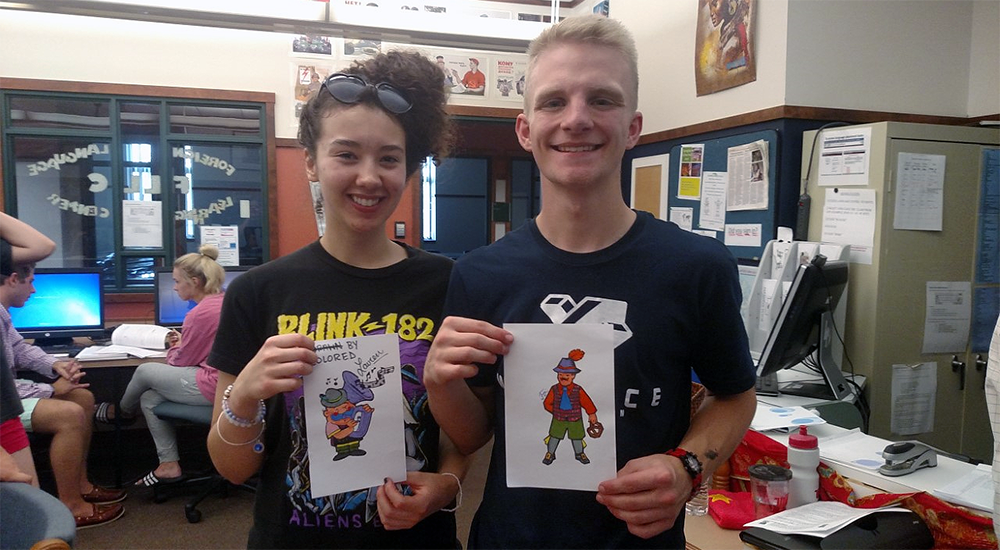 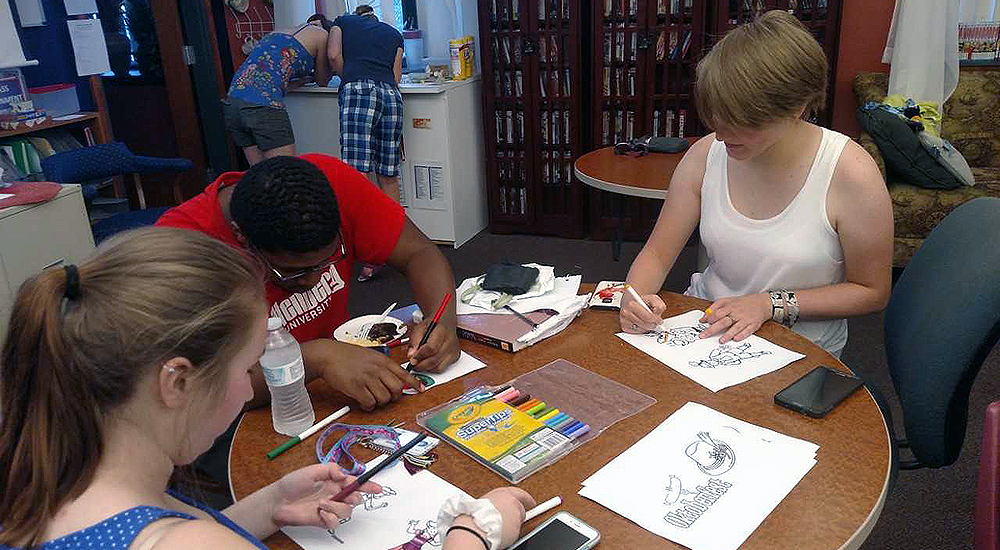 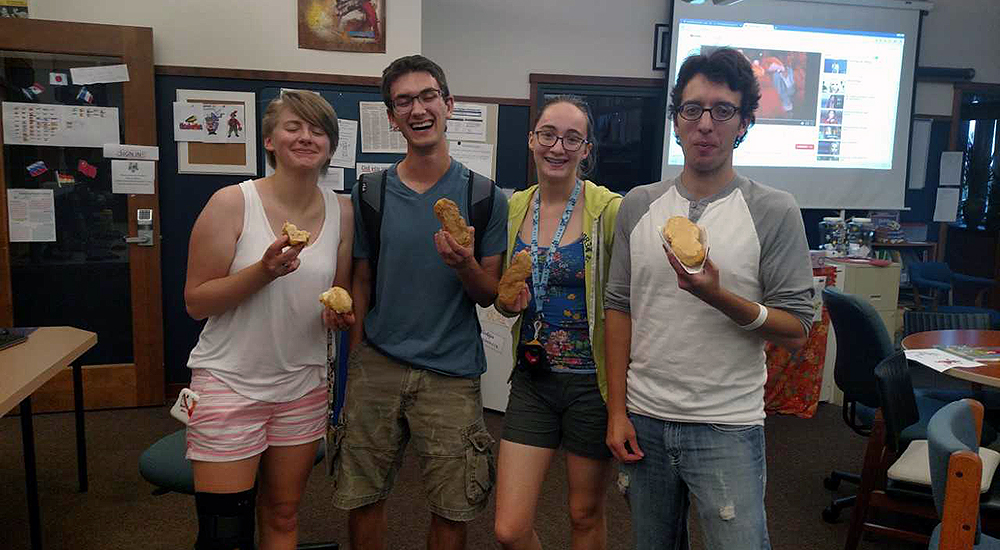 The first week in October, the LLC celebrated the Mid-Autumn Moon Festival, a popular festival in China, Taiwan, Malaysia, Singapore, Vietnam, Korea, and a few other countries. Paper lanterns appeared in the LLC with red paper tags attached. Each tag included a riddle from a world language.

Students were tasked with solving all the riddles and puns, and a few won prizes for their submissions to the LLC director. (One example: What food does a frog in Paris enjoy?). Additionally, the LLC teamed up with the East Asian Studies Club to celebrate this festival in the Diversity House. on campus. Participants were able to sample some moon cake and other tasty dishes reminiscent of the moon, fold some origami lotus blossoms and helped to put them together to form a Chinese character. 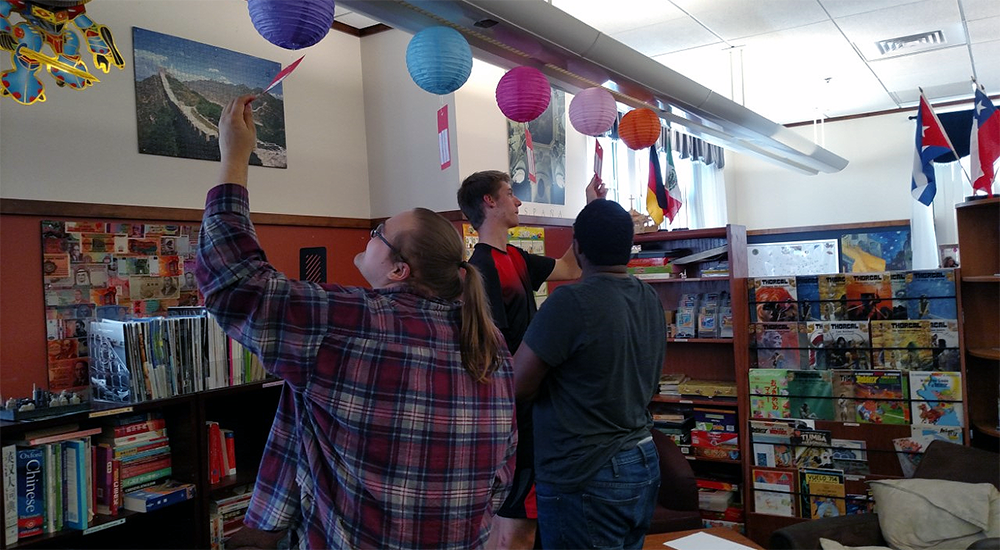 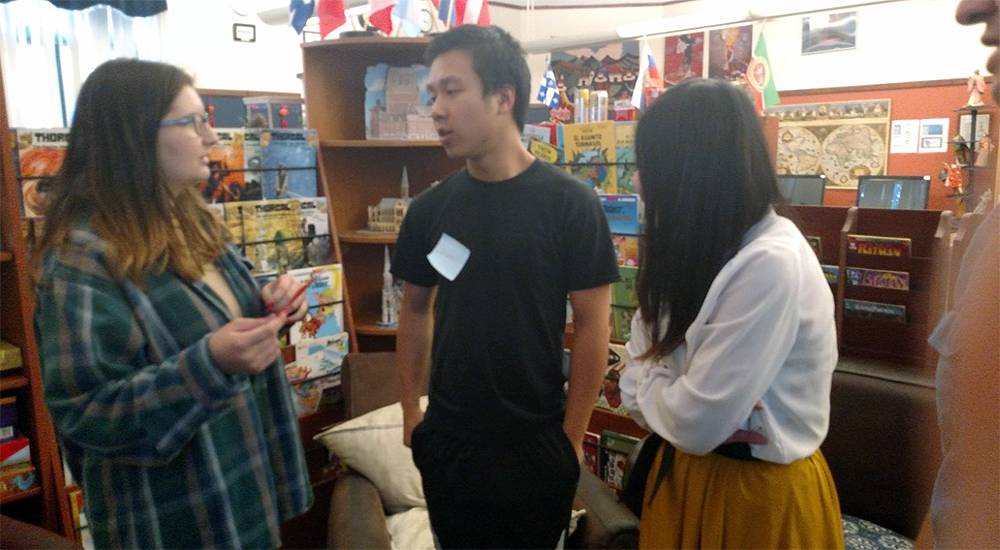 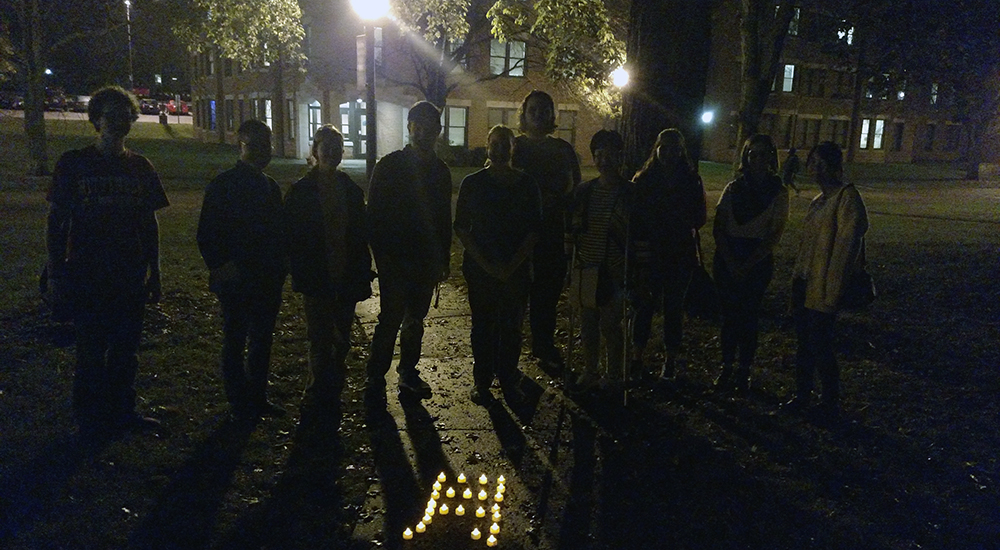 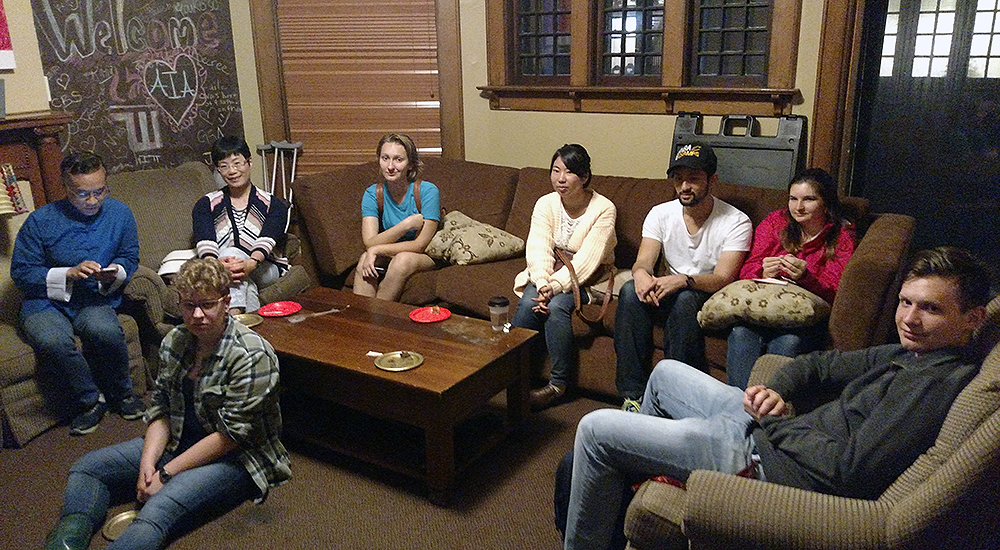 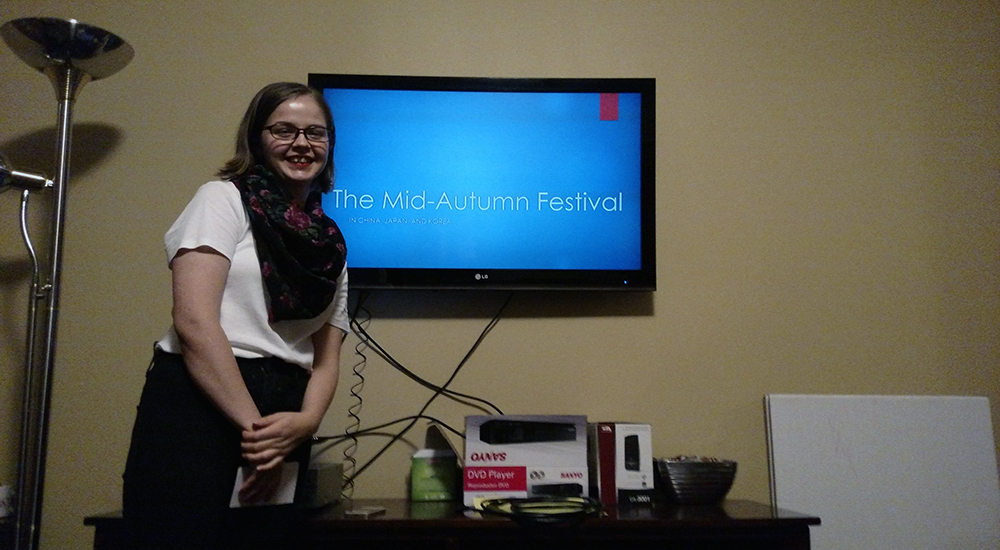 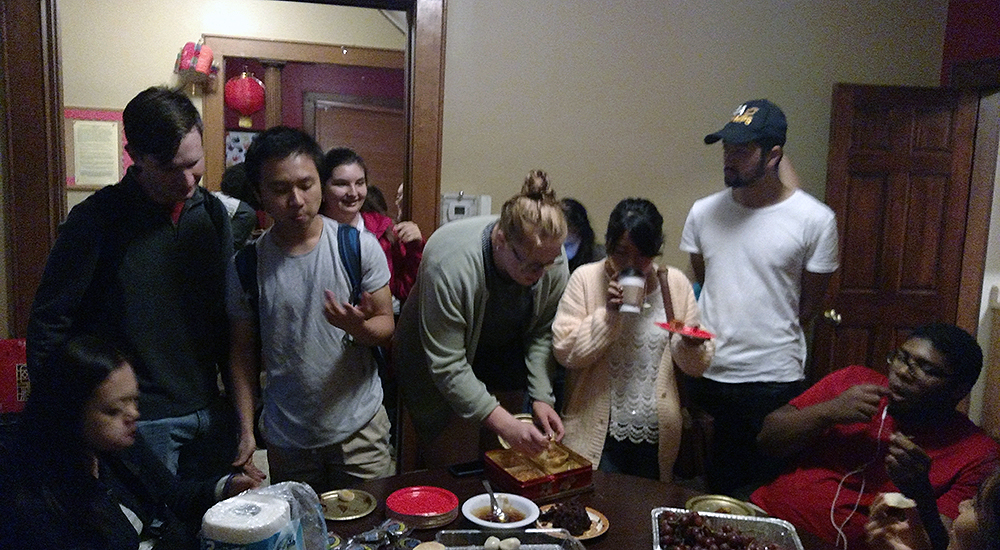 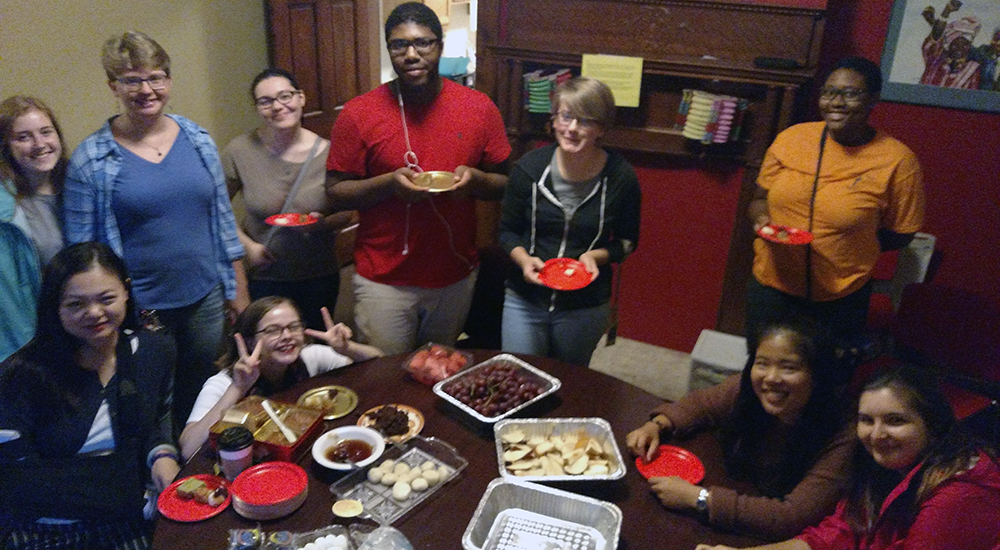