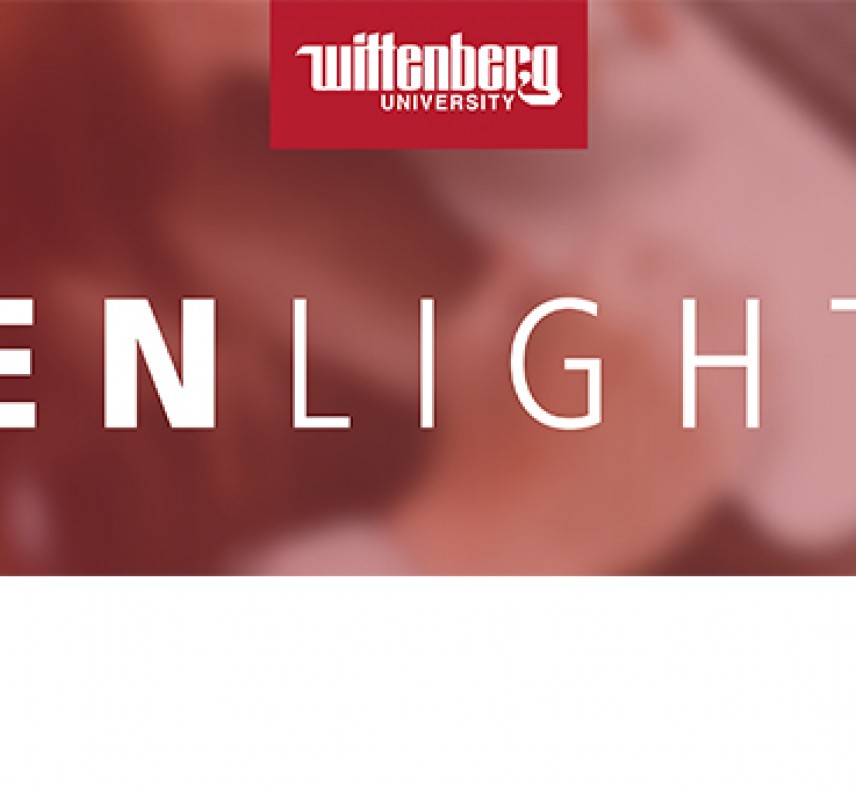 Reaffirming Wittenberg being ranked 46th among the “Most Entrepreneurial Colleges in America” by Forbes Magazine, the celebration highlights entrepreneurs in the social, non-profit and for-profit business sectors.

This alumni-led career panel serves as an opportunity for current students to learn and network as panelists discuss their careers and next steps while offering advice and information on how best to navigate securing a job with “your liberal arts education” and making the move to that 'next' career. Alumni will reflect upon the drive and entrepreneurial spirit, which helped them become business owners and founders of non-profits and how they are using their liberal arts education to pass on their light.

Following the panel discussion, snacks and beverages will be offered as the conversations and networking continue from 4:30 to 5:30 p.m. in the Kuss Science Center atrium. Additional alumni will join the group to offer greater networking opportunities for current students.

Rafferty, who majored in political science and minored in history, has been at the forefront of higher education communications and marketing for more than 15 years. He led the founding of Knowble Media in 2010, and today serves as its managing partner and CEO. He spends most of his time working with clients on strategy and leading Knowble’s internal creative team.

Ballinger, who majored in business and minored in physics, is a co-founder of Knowble Media and serves as executive creative director. He spends most of his time writing and directing Knowble’s many video productions, and in 2015, he led Knowble's expansion into the health care market and continues to push the boundaries of progressive storytelling.

May, a math major and business minor, was employed by SBC Global (now AT&T) for eight years in operations and engineering. He completed his M.B.A. at Otterbein College during that time, and in 2010, started his own marketing agency, Daymark Interactive. Daymark provides digital marketing solutions for a variety of businesses across the country. He is currently president of Wittenberg's Alumni Board.

Shroy is the founder and president of Approach Marketing, a virtual agency made up of marketing, public relations and social media specialists. At Approach, Shroy drives strategy and return on investment for clients ranging from startups to Fortune 500 companies. Under her leadership, Approach has doubled in size every year since its founding in 2010 and was recently named a fastest-growing company.

Tuney is the executive director of KIPP Columbus, one of the highest-gaining urban schools in the country. Prior to her current role, she served as a Teach for America corps member where she taught sixth and seventh grades in one of Philadelphia’s most chronically underperforming schools and led her students to achieve impressive academic gains. Tuney then joined the staff of an Ohio-based charter management organization, serving as the director of education services and leading the first-ever reconstitution of an Ohio charter school.

For more than 14 years, Loftus and her company Liminal Solutions has delivered custom solutions on a wide range of topics including executive transition acceleration, team effectiveness and strategic planning for organizations. She has served as an advisor to many senior leaders and provided innovative leadership development for some of the world’s largest corporations and leaders in the health care industry.

Zalewski is a founder, former chief scientific officer and current director of research at Front Range Biosciences, a startup agricultural biotechnology company specializing in tissue culture production and genomics. He also consults as the head of pathology services for Summit Plant Laboratories, which propagates commercial scale clean stock for the hops, mint, and potato industries and conducts pathology diagnostics for a variety of specialty crops. He has also led or worked on a number of projects in synthetic and molecular biology to investigate the expression, function, and evolutionary basis of plant genetics.

Baumanis, who majored in psychology with minors in speech and theatre, is a neuropsychologist specializing in traumatic brain injury rehabilitation and is the owner and clinical director of Brain Trainers Brain Injury program in Ann Arbor, Mich., which he founded in 2000. A frequent lecturer and guest teacher throughout the country, Baumanis is also a musical theatre director and has directed 52 musicals to date on a professional and semi-professional level. He also owns his own musical theatre company called Ann Arbor Musical Theatre Works.

Barnes, a geology major, is a former high school science teacher who is now a beekeeper managing around 700 hives in central Ohio. He and his wife, Jayne, Wittenberg class of 2003, founded and operate Williamsport, Ohio-based Honeyrun Farm. Together, they strive to produce environmentally mindful goods while ensuring the health and survival of their honeybees. Honeyrun currently sells seasonal and varietal honey along with value-added products such as soaps, salves, lip balms and beeswax candles.

Upcoming Enlight events include: A Taste of Wittenberg from 4-6 p.m. Friday, Oct. 6, along Alumni Way (Geil Lounge will be the rain site) and the university’s rendition of Shark Tank on Thursday, February 15, 2018 (more details to come later). The Taste of Wittenberg event will feature tasty treats from alumni members who have made a living in the food business. 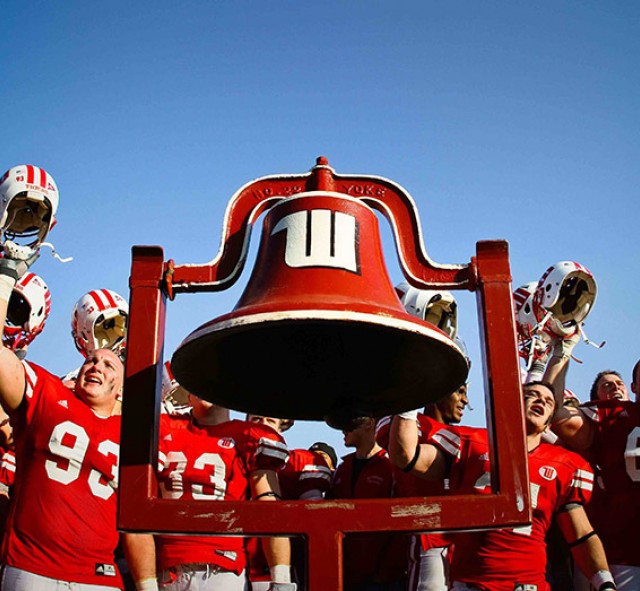 Wittenberg Tigers from all generations will show their pride once again as they journey back to campus for Homecoming & Reunion Weekend 2017, Sept. 14-17. 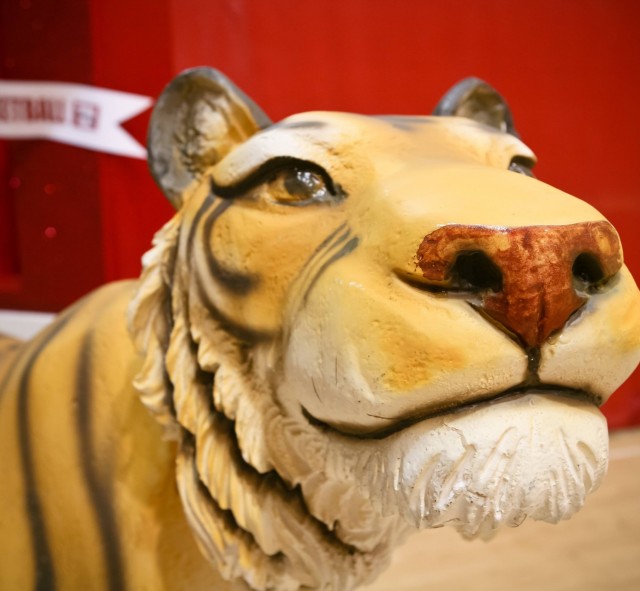 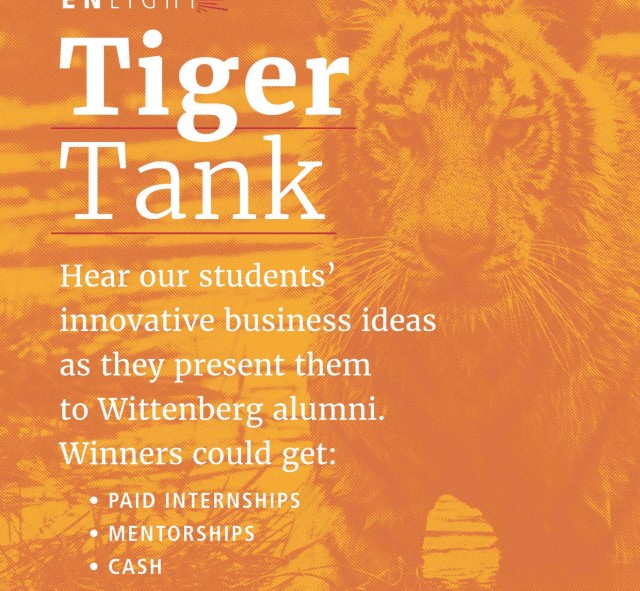 Affirmed by Forbes Magazine as one of the Top 50 Most Entrepreneurial Colleges in the nation, Wittenberg inspires innovative thinking in its students, which will again be on display during the university's first-ever Tiger Tank event, Feb. 15.