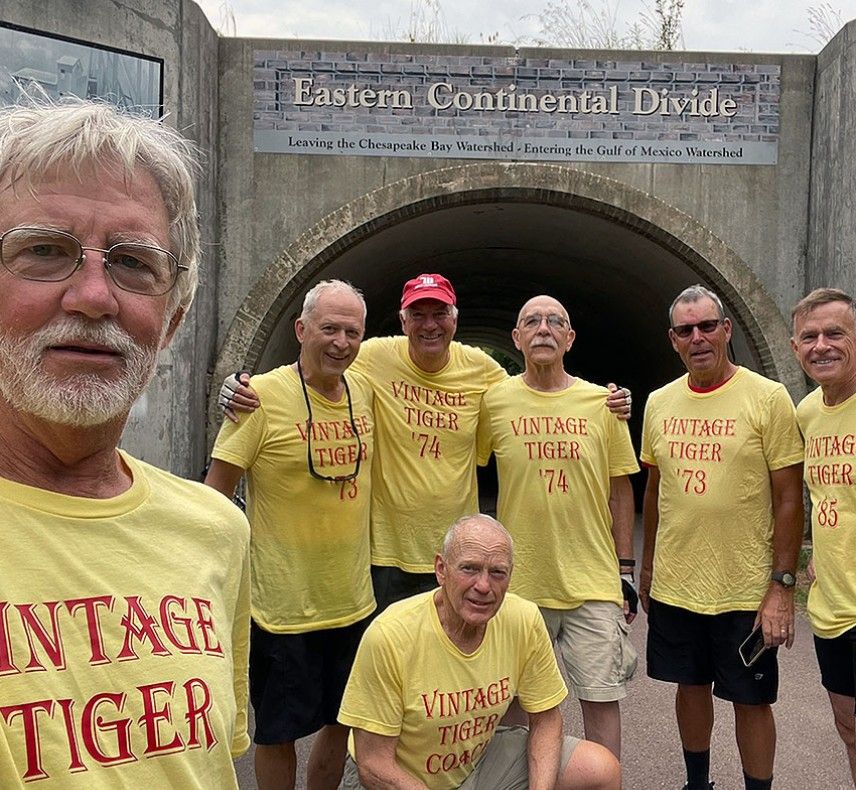 What is the connection between lacrosse sticks and bicycle trips? For a hearty group of Wittenberg alumni, that unlikely pairing created the perfect opportunity for a walk down memory lane – even while creating new memories.

Former Tiger men’s lacrosse players Jim Parks ’70, Bob Young ’74, Steve Ritzenthaler ’73, and Rick McClain ’74 were joined by friend Ben Davies ’73 on a 155-mile journey along the Great Allegheny Passage bicycle trail from Cumberland, Maryland, to Pittsburgh, Pennsylvania. Also along for the ride, which included an 18-mile climb to the continental divide, were former men’s lacrosse coaches Rob Umble and Dick Fahrney, who is 81 years old.

The four-day trip completed in early August was filled with laughter and tall tales. Most of all, the journey affirmed the Tiger ties that bind.

“We rode to keep old friendships fresh,” said Ritzenthaler, a standout in both football and men’s lacrosse during his undergraduate days on campus. “Every evening after riding we ate and drank and told old stories. We were a group of lifelong friends who were still ready to Tiger Up!”

While it was important for Ritzenthaler, who coached Tiger men’s lacrosse from 1984-93, and others to re-connect, it was just as important to share the experience with Fahrney, the program’s first coach. He was a head coach or assistant coach for three different sports at Wittenberg between 1967 and 1976 – football, men’s lacrosse, and baseball – and he built lasting relationships with his student-athletes that he has maintained despite time and distance (he has lived in Colorado since his retirement).

Fahrney, who was inducted into the University’s Athletics Hall of Honor in 2011, maintains a passion for Wittenberg. Current Head Coach Jay Owen further honored him by establishing a men’s lacrosse alumni recognition award that is presented annually in his honor.

“The student-athletes that come through the Wittenberg University men’s lacrosse program never cease to amaze me with their passion and their support of the program,” Owen said. “This passion is shown by the first coaches getting together with former players for a bike trip, but also by alumni of all ages finding different ways to keep in close contact.”

Owen, who has led the program since 2014, continues to cultivate that network by keeping in close contact with alumni team members and inviting them back to campus as often as possible. The program’s annual alumni game is a popular event with close to 20 alumni returning to play during Homecoming 2021.

“We have a network of current and former student-athletes and coaches who have built a tremendous connection with one another,” Owen said. 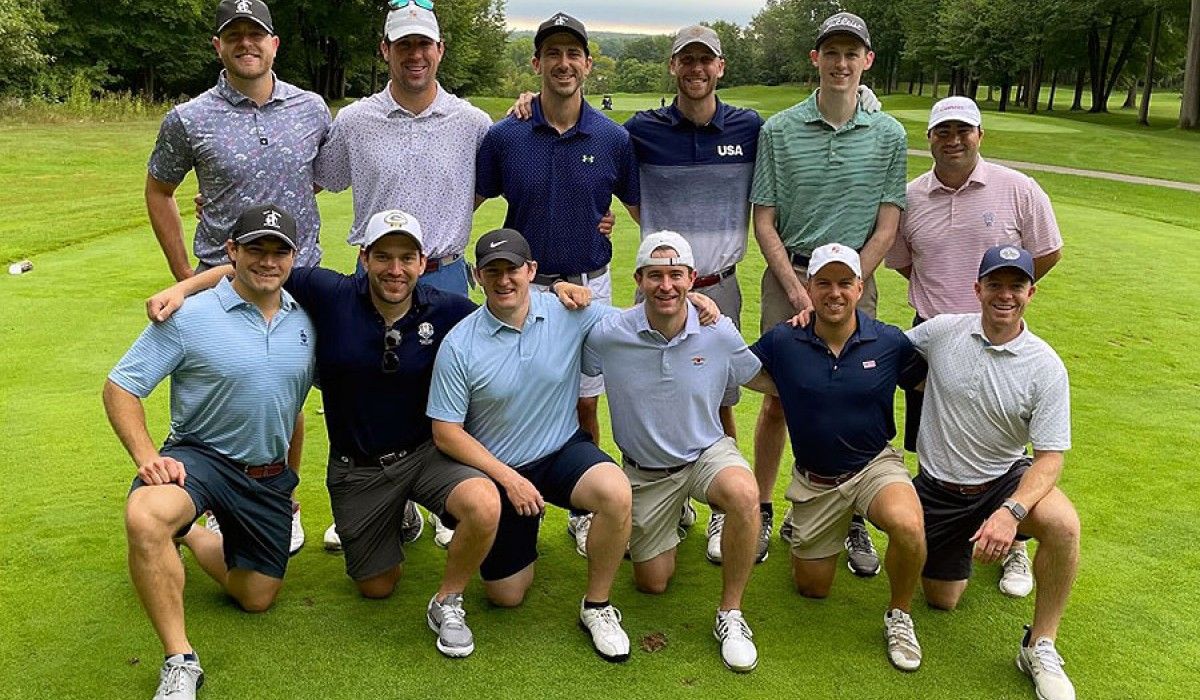 Wittenberg Alumni on the Golf Course 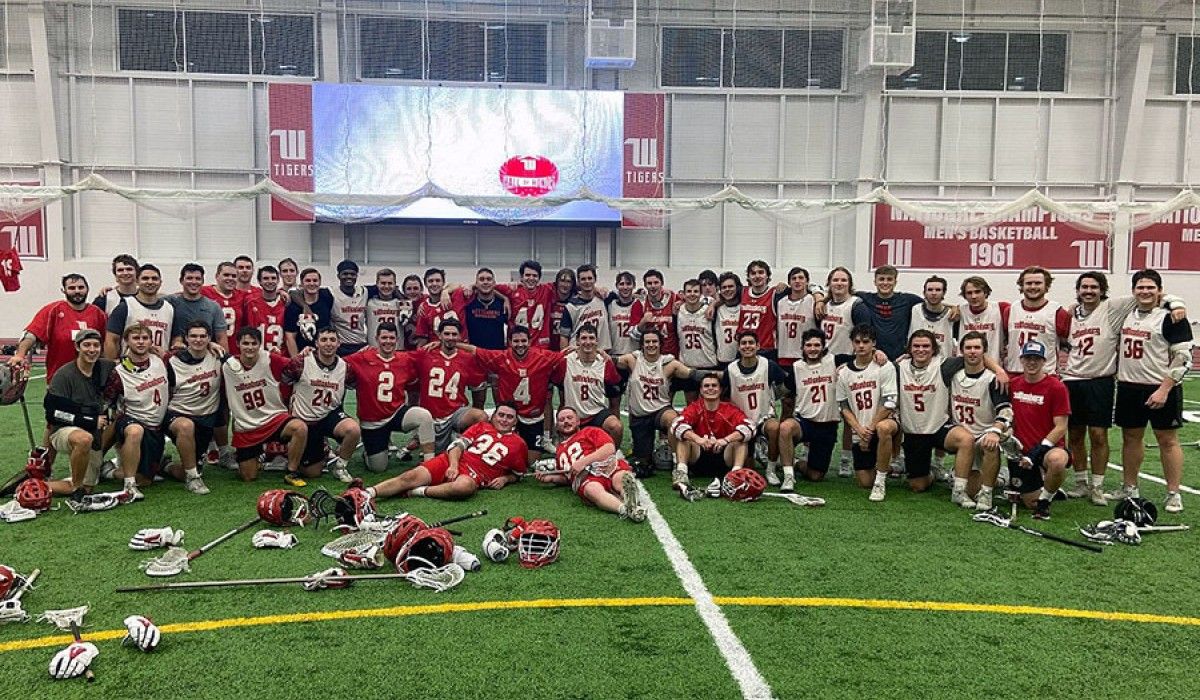 Alumni and Current Student-Athletes After the 2021 Alumni Game

Pictured in Steemer: Alumni and current student-athletes who participated in the 2021 men's lacrosse alumni game during Homecoming weekend. 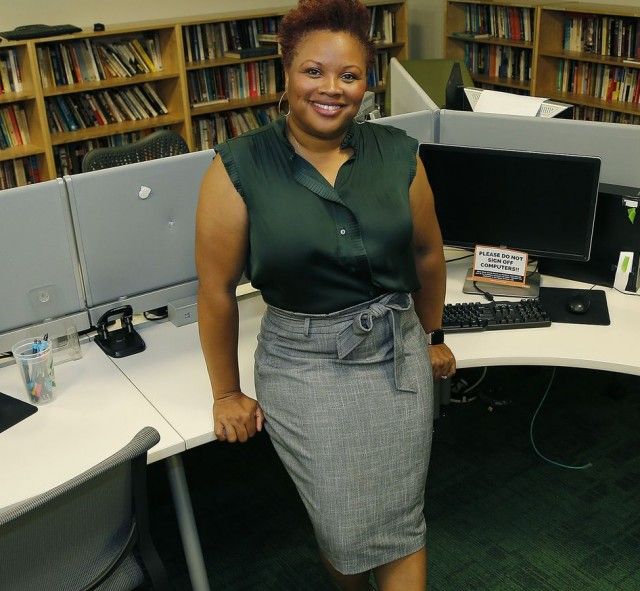 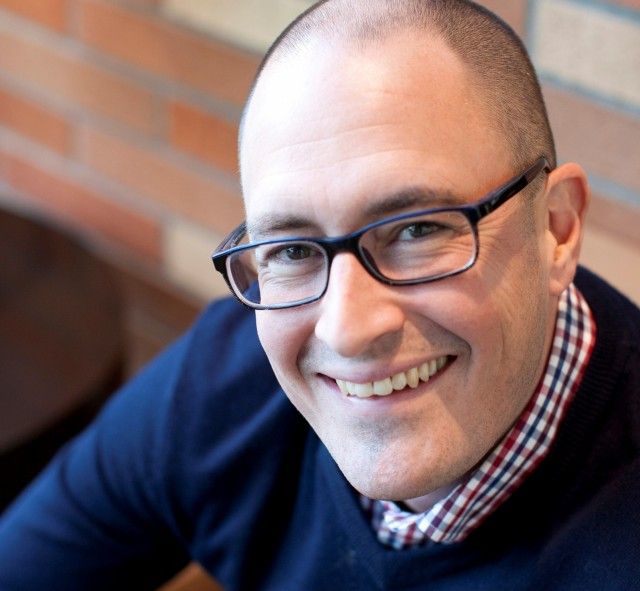