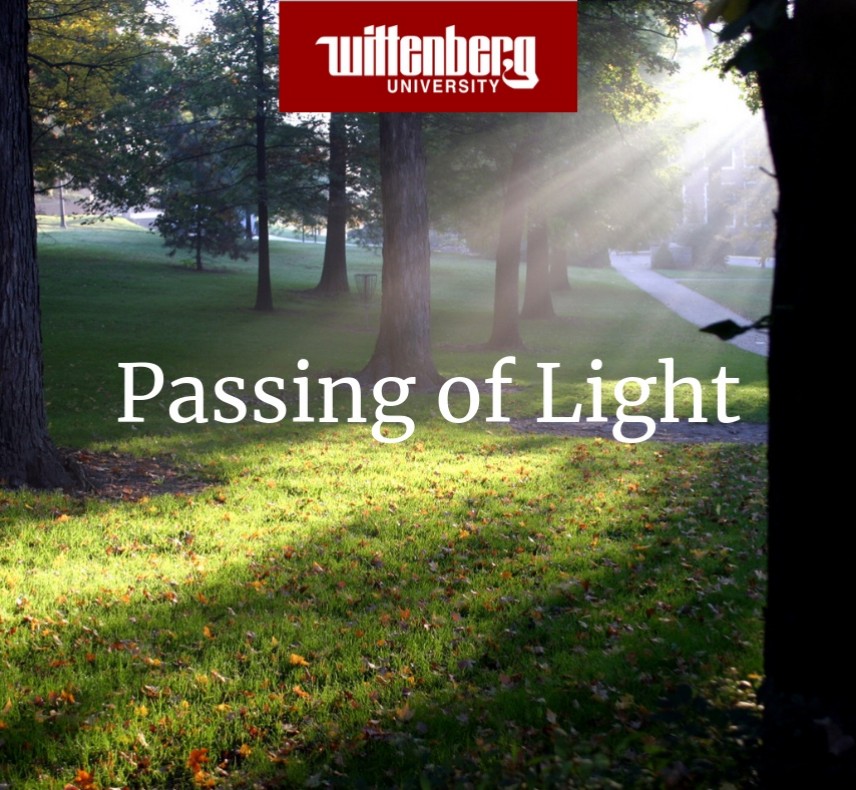 The following selections were compiled by Cindy Holbrook and Emily Nolan in University Communications over the past few months through the sharing of information or actual story submissions. Feel free to send your update to stories@wittenberg.edu. Correction needed? Please contact Cindy at holbrookc@wittenberg.edu. Thank you!

Standing Up to POTS®, founded in 2014 by Cathy Pederson ’91, Elizabeth “Betty” E. Powelson Endowed Chair in Biology at Wittenberg, hosts the fundraiser to raise awareness about POTS, an incredibly debilitating chronic illness that robs teens and adults of their quality of life.

Wanting to help future Tigers, David Oliver ’62 established a $1,500 scholarship through the Darke County Foundation(DCF) to help a Versailles High School senior who will be attending Wittenberg. Oliver, who has resided in Miami, Florida, since graduating, was a multifaceted student and athlete. As the first Versailles graduate to wrestle at the collegiate varsity level, he transcended the competition as a member and captain of the Wittenberg wrestling team. He graduated with the highest grade point average from the department of business before earning his master’s degree in business administration from Miami University.

Dave Huml ’91 was recently named chief operating officer of The Tennant Company, a leading force in the production and distribution of cleaning solutions. In this new role, Huml will provide oversight for regional sales, service-based organizations, and various operations departments. He will also help implement the company’s new enterprise strategy. Huml earned his bachelor’s degree from Wittenberg and his master’s in business administration from the University of Minnesota.

Through his dedicated work as the managing partner of FourThought Private Wealth, Scott Pinkerton ’85 was recently named to the list of the top 1,200 U.S. financial advisors by Barron's Magazine and Barron’s.com. This is the 12th time he has earned this ranking, and he attributes his success to always prioritizing his clients’ best interests. The data from this ranking was provided by more than 4,000 financial advisors and includes results pertaining to client retention, firm revenue, regulatory record, and assets under management. In addition to this consecutive ranking, Pinkerton was also deemed the 17th best state wealth advisor of the 115 practicing advisors in northern Florida by the Forbes American Business magazine. He holds professional degrees from Wittenberg and the Wharton University School of Business, and he is a certified financial planner, investment manager, and private wealth advisor.

Obstetrician-gynecologist Dr. Sarah Kerlin ’95 has been recognized consistently for the work she does at Community Hospital North in Indianapolis, Indiana. Kerlin is board-certified by the American Board of Obstetrics and Gynecology and is a Fellow of the American College of Obstetricians and Gynecologists. She is the recent recipient of the Compassionate Doctor Award as a five-year honoree and has repeatedly earned the Compassionate Doctor Recognition, On-Time Doctor Award, Patients’ Choice 5th Anniversary Award, and Patients’ Choice Award. In 2014, Kerlin was deemed a Top 10 Doctor in the metro area, neighborhood, and state. Following her time at Wittenberg, Kerlin earned her medical degree from Indiana University School of Medicine.

Carla Sarratt ’98 was recently named the next director of libraries at The University of Mount Union. According to the vice president for academic affairs and provost at Mount Union, Sarratt was selected from a competitive pool of applicants. Her vast array of experiences and cooperative approach to leading ultimately earned her the position. Sarrat has held librarian positions at New Hanover County Public Library, the African American Cultural Center Library, and Lincoln University, where she served as the director. She earned a master’s degree in library science from North Carolina Central University.

The Ohio Department of Natural Resources recently named Eric Vendel ’90 the newest chief of the division of Oil and Gas Resources Management. Serving as the division’s lead attorney since 2012, Vendel will now serve the public and the environment by overseeing the regulation and distribution of Ohio’s natural resources. Prior to working with the Ohio Department of Natural Resources, Vendel drafted various oil and gas bills as an attorney with the Ohio Legislative Service Commission. He earned his M.A. in organic chemistry from The Ohio State University and his J.D. from Capital University Law School.

The University of Dayton recently announced the hiring of Karlos L. Marshall ’13 as manager of the Greater West Dayton Incubator Project, a project that will center around providing advancement opportunities to startups and underrepresented firms. Through the implementation of these services, entrepreneurs will collaborate with university students and provide them active learning opportunities in the business sector. Marshall is an entrepreneur and co-founder of The Conscious Connect, a nonprofit organization that aspires to revitalize local and global neighborhoods. Marshall was recently named co-Alumnus of the Year by Wittenberg’s Alumni Board. He shared the distinction with Moses Mbeseha ’13, also co-founder of The Conscious Connect.

With the reveal of her virtual exhibit, Lauran Instenes ’17 completed a project she began at Wittenberg. A recent graduate of the Columbia Oral History program, Instenes focused her final exhibit on the 50-year anniversary of Why Not III, the first gay bar in Springfield. Visitors can embark on a virtual tour complete with audio, video, and 360-degree images of the bar. This interactive experience serves to educate viewers about the national and regional history of gay rights, as well as memorialize the bar owner, JR Hook, who was recently given an honorary June Holiday by the Springfield Mayor Warren Copeland.

The CCI Health & Wellness Services in Maryland recently announced the hire of Melissa Duckwall Clark ’94 as their new chief medical officer. In this role, Clark will supervise 60 health care staff as they provide care to more than 33,000 patients. Serving various roles for the CCI since 2010, Clark has always had a passion for improving the welfare of patients and the larger community. She is board-certified in family medicine and applies her expertise to help facilitate community engagement. Clark earned a B.A. in biology at Wittenberg, her M.D. at Wright State University Boonshoft School of Medicine, and completed her family medicine residency at the University of Illinois.

In the face of adversity, sisters, Courtney Huck ’17 and Lexie Huck, found a way to compete and dominate in the sport they love. From their hometown in Illinois, the Huck sisters have always had a passion for volleyball and have led their teams in countless victories and state championships. When the COVID-19 pandemic halted their club volleyball seasons, the two ventured 300 miles out of the state to keep playing. Though traditionally indoor players, the sisters competed in a sand volleyball tournament at Miami Valley Sand in Cincinnati, Ohio, and walked away with the championship crown. Courtney is a former player for Wittenberg women’s volleyball team, and Lexie is currently a member of Calvin University’s volleyball squad.

Wittenberg University’s Lambda Iota Chapter of the National Collegiate Hispanic Honor Society has been named an “Honor Chapter” for its outstanding activities in 2019-20, an award that was bestowed to only 11 chapters nationwide in 2020. This is the 4th year in its history that Wittenberg's chapter enjoys this distinction. Professor Mary E. Zuidema, Wittenberg’s chapter adviser, was instrumental in earning this year's national recognition.

Each summer, the 627 chapters of Sigma Delta Pi nationwide are asked to submit an annual report detailing their numerous activities and projects from the academic year. Based on these reports, the National Executive Committee chooses approximately 10-15 “Honor Chapters” annually. This recognition is based upon the caliber of chapter projects that reflect the Sigma Delta Pi mission of honoring excellence in the study of the Spanish language, contributing to cultural understanding and upholding the goals of the society.

With its national office at the College of Charleston in South Carolina, Sigma Delta Pi is a member of the Association of College Honor Societies, the nation’s only certifying agency for college and university honor societies. 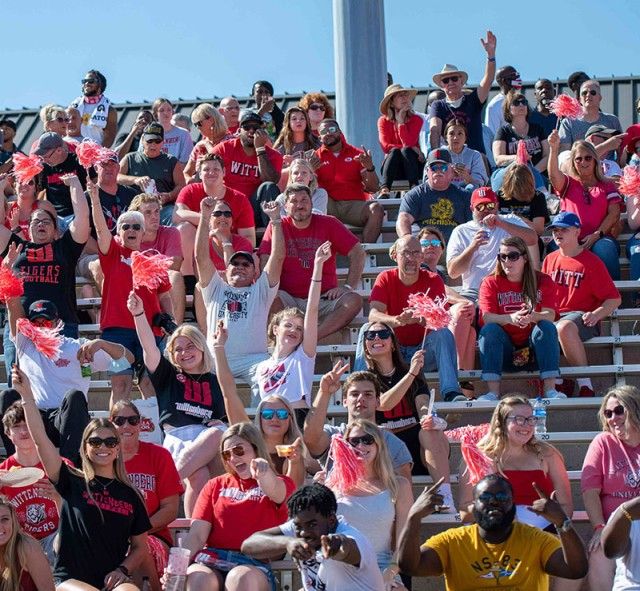 Wittenberg University is excited to announce that the 2021-22 fundraising year was one of the most successful in modern times. 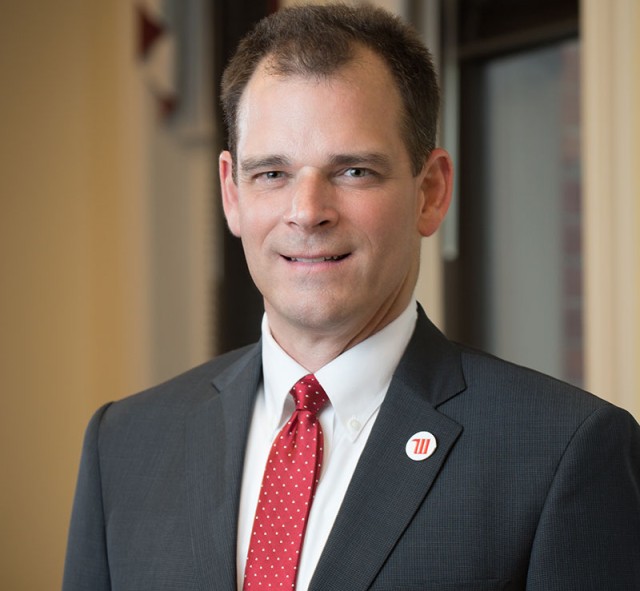 Wittenberg University President Michael L. Frandsen, Ph.D., has been selected to serve as vice president of the North Coast Athletic Conference for the next two academic years.