Springfield, Ohio, is the governmental seat of Clark County located in the southwest of Ohio. The surrounding terrain is relatively flat, accentuated by rolling hills. Prehistoric mound builders were probably the first residents of Clark County. Traces of their structures can still be found in nearby Enon, where the second largest conical mound, the Knob Prairie Mound, can be found. 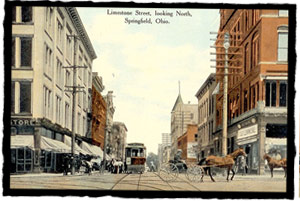 George Rogers Clark, for whom the county is named, led a band of Kentuckians, including Simon Kenton, into this territory and defeated the Shawnee Indians at the Battle of Piqua on Aug. 8, 1780. One of the tribe was a boy of 12, named Tecumseh, who later became a famous Shawnee leader dedicated to fighting whites. Born in Clark County, emissary to all the Native Americans of the Northwestern and Southwestern territories, Tecumseh raised a warlike fist against westward migration of settlers in the early 19th century. He led unrelenting warfare against white settlement in his land.

A member of the Clark Expedition, John Paul, returned to the area and built his home in 1790. He is believed to be the first white settler to locate in what became known as Clark County.

The Treaty of Greenville in 1795, between the Indians and General Anthony Wayne, in which the Indians agreed to stop hostile acts toward settlers, generally opened up this area for settlement. Indian hostility in Ohio ended with General William Henry Harrison's victory at Tippecanoe in 1811. It began the opening of the Northwest Territory.

One of the county's early settlers was James Demint who erected a cabin at the confluence of Mad River and Lagonda (Buck) Creek in 1799. It was on his land that a plat of the city was made in 1801 by surveyor James Dougherty. That same year, Griffith Foos built the first tavern, which became a famous stagecoach stop. In 1804, the first post office was recorded for Springfield. Simon Kenton built a gristmill and distillery where the old International Harvester plant now stands.

The 412 square mile area that became Clark County was mapped out of parts of Champaign, Greene, and Madison Counties in 1817. The first meeting of the Clark County Commission was held on April 25, 1818. The 1820 census showed a total population of 9,535. By 1827, the tiny frontier hamlet had become a town and was granted a city charter by the State of Ohio in 1850. Springfield was named by Simon Kenton's wife for its many springs and abundant waters.

Several factors contributed to the rapid growth of Springfield and Clark County. The Old National Road was completed through Springfield in 1839, and the railroads of the 1840's provided profitable business to the area. At the turn of the century, 54 passenger trains arrived daily in Springfield. Agriculture, then industry, flourished. By the beginning of the Civil War, the two had joined forces to help Springfield become one of the world's leading manufacturers of agricultural equipment.

International Harvester Company (now International Truck & Engine Corp.) is noteworthy in this regard. The manufacturer of farm machinery became the leading local industry after a native William Whitely, invented the combined self-raking reaper and mower in 1856. This machine was an improvement over any known farm machinery and was in great demand after the Civil War.

Another native, James Leffel, invented the first practical water turbine in 1862 and began manufacturing it in his Springfield foundry. In the 1880's, P.P. Mast began publishing "Farm and Fireside." Although used initially to advertise his farm machinery, it soon became a leading periodical and was the basis for the Crowell-Collier Publishing Company.

In the 1880's, schoolteacher and superintendent A.B.Grahm, began supervising agricultural extension clubs for boys and girls. In 1902, he organized the clubs on a national basis and that was the beginning of the 4-H Club movement.

In 1845, Wittenberg University was established by the English Lutheran Synod of Ohio and has grown to be a leading educational, cultural, and intellectual force in the midwest.