Wittenberg, dear Wittenberg,
Once again to thee
We, thy grateful children, pledge
Love and loyalty.

We shall always love thy groves
And thy classic halls;
Mem’ry, like the ivy twines
Round thy hallowed walls.

Wittenberg, dear Wittenberg,
Time flies fast away;
Soon our happy college days
Will be gone for aye;
But in all life’s storm and stress,
Whate’er we may do,

To our Alma Mater dear
We will e’er be true.

Fight on for old Wittenberg (and vict'ry),
Speed up her unending surge (to vict'ry),
Back those opponents up to the wall;
They are due for a fall, Wittenberg!
(Rah! Rah! Rah!)

History of the Wittenberg Fight Song 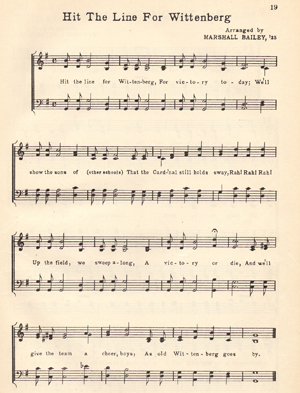 The fight song of the Wittenberg Tigers has a long and varied history. While multiple spirit songs and yells have served to cheer on the athletics teams, the earliest records of an official fight song date back to 1900, when the football team was roused by a piece called "Nothing Can Beat Wittenberg," which carried the tune of "Yankee Doodle."

In 1911, "Hit The Line For Wittenberg" became the spirit tune of the Tigers. Sheet music for the song, arranged by Marshall Bailey, class of 1925, can be viewed by clicking the image to the right. 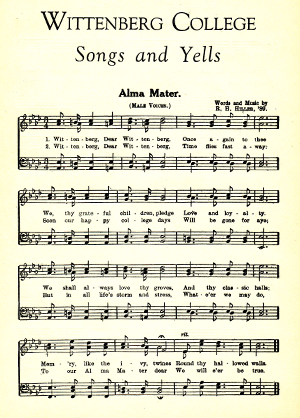 In 1929, Lowell Baxter, class of 1930 and a member of the college's Marching Band, wrote the words and music for a new "Wittenberg Fight Song," but at some point in the following 15 years a new song was penned by Ray Whitman. His version, which originally referenced the athletics teams as the "Lutherans," cemented itself in the lore of the college and has persisted to this day as the official Fight Song, with one minor change to the lyrics, reflecting the adoption of the Tiger as the official school mascot.

Today, the song can be heard after every Tiger football victory, sung by the team while gathered around the victory bell, and many teams sing the tune to celebrate conference championships and other marquee victories. In other words, Wittenberg teams sing the Fight Song a lot.

While one official fight song now serves as the Tigers' rallying cry, the student body has embraced many other verses throughout the years. A sampling can be found in the compilation "Wittenberg College Songs and Yells," circa 1930, available in PDF format by clicking the image on the left.

Thanks to Pam Deselem and Suzanne Smailes for their assistance. Some information taken from "The Songs We Sang" by Willard D. Allbeck '22, University Archivist Emeritus, published in "The Wittenberg," date unknown.