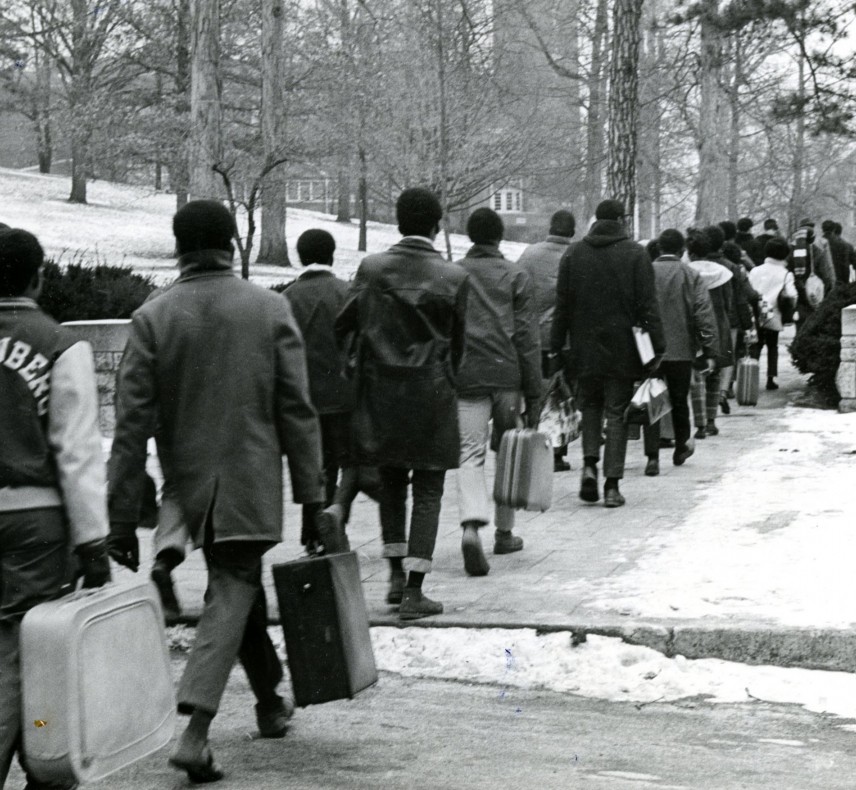 Fifty years have elapsed since 44 students first challenged the University by conducting a walkout to respond to the call for greater inclusion. As the nation is commemorating the 50th anniversaries of central moments in the Civil Rights era across the country, Wittenberg invites everyone to participate in a Concerned Black Students (CBS) Commemorative Walkout, as well as offer reflection and discuss the legacy of the historic 1969 event during a series of special events slated for Homecoming Weekend, October 24-27.

For the founding members of CBS, lifelong lessons involving choice, values, sacrifice, and conscience were imparted following the walkout. The synergy of these two forces — the students of CBS and the Wittenberg community on the Springfield campus — would also catapult Wittenberg onto a journey toward institutional change unanticipated at the start of the 1969 fall semester. It is a quest that is still unfolding today.

As part of that quest, a reenactment of the 1969 CBS Walkout will take place on Friday, Oct. 25 beginning at 2 p.m. on Alumni Way. Following the reenactment, participants will learn more about the history of the CBS student organization and the walkout of 1969 through a special video and panel discussion from 2:30 to 4:30 p.m. in Bayley Auditorium of the Barbara Deer Kuss Science Center. A reception follows the discussion from 4:30 to 5:30 p.m. in the Hobson Atrium of the Science Center. On Saturday, Oct. 26, CBS will host a tent at the Homecoming Tailgate from 10 a.m. to 4 p.m. along East Campus Drive followed by the Black Excellence Soiree, a celebration of excellence and a place of gathering for current students and alumni in their best dressed, from 8 to 10:30 p.m. in room 212 of the 1929 Field House of the Health, Wellness & Athletics Complex.

“For those of us who were there, it was a moment when we realized that social change was not just a theoretical proposition,” said Ron Woods, Wittenberg class of 1969, president and founding member of CBS, longtime professor at Eastern Michigan University, and emeritus director of the Wittenberg Board of Directors, in a special Spring 2009 issue of Wittenberg’s alumni magazine. “It was something you had to be willing to commit to, organize for and make a sacrifice for.”

The assassination of Rev. Martin Luther King Jr. on April 4, 1968 caused Wittenberg, as it did the nation, to realize the distance yet to go in the unfinished journey of civil rights reform in the United States.

In the days to follow, Wittenberg held a memorial march to commemorate Dr. King’s legacy. In the midst of small and often difficult conversations across campus, African American students began meeting to consider the meaning of this watershed event for them as members of the Wittenberg community. CBS was born of this moment.

By the end of the 1968 fall semester, CBS had issued a set of demands to the University targeting 10 points of entry into needed institutional change. To compel Wittenberg toward a greater degree of responsiveness, CBS settled upon a collective undertaking that was unique among the wave of campus activism in the 1960s. The CBS Walkout of 44 students commenced on Monday, January 13, 1969 and was resolved on Saturday, January 18. During this time, black students of Antioch College hosted CBS. For the Wittenberg campus, the regular rhythm of the semester gave way to “learning beyond the classroom” moments for the entire community.

CBS, an organization that empowers students of color while educating the University on diversity issues, formed at the end of the tumultuous Civil Rights era of the 1960s in an effort to gain a voice on campus and has evolved into an organization that does not just embrace African Americans, but all Wittenberg students through a variety of events and activities. In recent years, CBS has partnered with such student organizations as the Gay Straight Alliance, the American International Association, the W.A.G.E. Womyn’s Center, and Student Senate to provide campus programming opportunities.

CBS operates out of the refurbished William A. McClain Black Culture House, named for the groundbreaking late Cincinnati-based attorney, judge, and member of Wittenberg’s class of 1934. Still considered one of the most respected attorneys in the nation, McClain passed away on February 4, 2014 at the age of 101. He received numerous honors during his illustrious career, including the Ellis Island Medal of Honor, which recognizes the achievements of outstanding ethnic Americans and their contributions to the nation.

CBS organizes several recognizable events each year, including the Unity March in October, the commemorative walkout in January, a host of Black History Month events in February, and the Freedom March and Martin Luther King Jr. panel discussion in January.

Today and for those who came to Wittenberg shortly after the walkout, CBS has continued to be a place for African Americans on campus to regroup, debate, and gather – a kind of home away from home. The group strives to include everyone and celebrate diversity of all kinds, and with its long history on campus, has also laid the groundwork for other groups on campus.

According to past participants in the annual commemorative walkout, the event of 1969 was a call for change, and it’s a call that continues to bring students together today with many now asking how they can be united, while still celebrating the differences that make them distinctive.

To register for events or for more information about the weekend's festivities, contact the Office of Alumni Relations at (937) 327-7414. To see the complete listing of events, view the schedule.