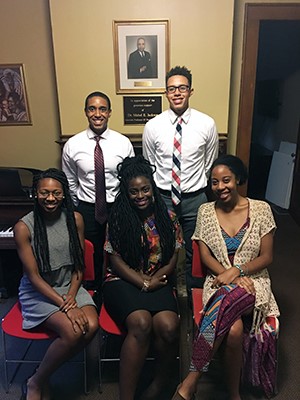 Student activism on college and university campuses has a long tradition in the U.S. From challenging the rules and policies that governed campus life in the 1920s and 1930s to a desire to have a broader impact on the life and direction of the nation, student activists mobilized and organized their fellow students into such organizations as the American Student Union, the National Student Federation of America, the National Student League, the Student League for Industrial Democracy, the American Youth Congress and the Southern Negro Youth Congress.

At the height of the 1960s Civil Rights Movement, black students at predominantly white campuses, responding to and reflecting the demands of the Civil Rights and Black Power Movements of the 1960s, began to challenge the racial status quo on these campuses. Black students, and their white allies in such organizations as the Students for a Democratic Society (SDS), pushed for the recruitment of more African American students, the hiring of African American faculty and administrators, and the adoption of courses and programs in black studies.

These students organized themselves into Black Student Unions, a term adopted to characterize the collective efforts of students on many of these campuses. Their demands were often met with resistance and/or pledges to act but little or no resources committed to change. Frustrated efforts led many of these students to engage in civil disobedience on the campuses or take other actions to mobilize broad support from supporters, both on and off campus, as a way of putting pressure on administrators and their board of trustees to initiate reforms at their respective institutions.

CBS remains a vital resource for minority students at Wittenberg. Recognizing that role, along with the tradition of activism and involvement, CBS remains committed to cultivating and promoting a campus that embraces diversity and inclusion and is open to all students who share that commitment.

You can reach this organization’s officers by emailing cbs@wittenberg.edu