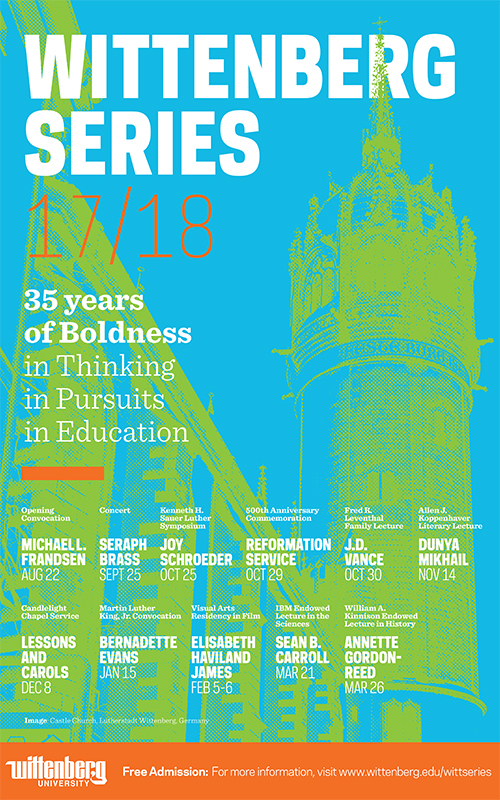 The Wittenberg Series is a selection of cultural activities annually presented by Wittenberg University.

All Wittenberg Series events are admission-free.

In addition to this year's Wittenberg Series events, the university will celebrate the 500th anniversary of the Reformation with events intended to help us understand this movement’s impact and continuing legacy. When Martin Luther, on October 31, 1517, posted his Ninety-five Theses on the door of the Castle Church in Wittenberg, Germany, his action helped begin the Reformation, with its remarkable people, ideas and events that decisively affected Christianity and, ultimately, world history. Click here to learn more.

"Neither Safe Nor Right To Go Against Conscience"
Dr. Joy Schroeder, Theologian, Trinity Lutheran Seminary and Capital University
An Evangelical Lutheran Church of America (ELCA) pastor, Schroeder is an expert in medieval and Reformation history, the history of biblical interpretation and the history of women in the church. Read More...

Dunya Mikhail, Iraqi Poet and Arab American Book Award-Winner
Born in Iraq in 1965, Dunya Mikhail was forced to flee in the wake of the first Gulf War when her writings attracted the attention of Saddam Hussein’s government. Read More...

Lessons and Carols for Advent & Christmas
This candlelight service features readers from the campus and community, with music featuring Wittenberg's music ensembles. The service provides a perfect time of reflection as the Advent Season unfolds.

"Assignment of Fire"
Bernadette Evans '89, Community Activist
Born and raised in Cleveland, Ohio, Bernadette Evans, Wittenberg class of 1989, is the co-founder of The Math King LLC, an in-home tutoring service, and the Above the Rim Basketball league, serving more than 300 at-risk youth inside the 6th district in Wilmington, Del. Read More...

"The Serengeti Rules"
Sean B. Carroll, Evolutionary Biologist and Author of The Serengeti Rules: The Quest to Discover How Life Works and Why It Matters
An award-winning scientist, writer, educator and executive film producer, Sean Carroll is vice president for science education at the Howard Hughes Medical Institute and the Allan Wilson Professor of Molecular Biology and Genetics at the University of Wisconsin–Madison in Madison, Wis. Read More...