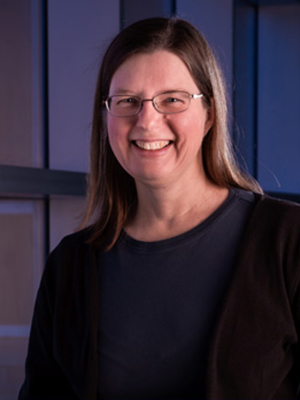 As an undergraduate, Dr. George spent several summers working with a research group at the University of Missouri, using the wave properties of neutrons to investigate questions in quantum physics. This experience motivated her interest in teaching and doing research with undergraduate students. After earning an MS in medical physics and a PhD in experimental nuclear physics and teaching at colleges in New Jersey and Wisconsin, she joined the Wittenberg faculty in 1998.

At Wittenberg, she has designed courses in biomedical physics, nuclear and particle physics, electronics, chaos and fractals, and pattern formation. She has been involved in physics education research, studying how students' use of computers in the physics laboratory affects their learning about momentum and energy. She is active in regional and national physics organizations, has helped organize national conferences on teaching experimental physics, and recently served as the president of the Advanced Laboratory Physics Association.

Her current research is investigating fundamental forces and symmetries of nature by doing experiments on nuclear beta decay and on positronium (an artificial “atom” consisting of an electron and a positron). These experiments involve Wittenberg students in frontline, hands-on research. She has also worked with Wittenberg students on environmental projects such as studying the restoration of local river systems and calculating the university's carbon footprint.