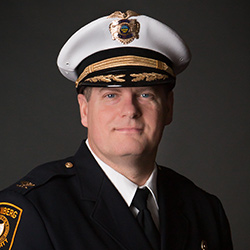 After retiring from the Springfield Police Division, Chief Hutchins joined the Wittenberg community on March 24, 2014. Chief Hutchins began his Law Enforcement career on September 11, 1989, as a patrol officer. During his 25-year career, Chief Hutchins served in various positions to include DARE, Investigations, Intelligence Unit, and Community Policing. He spent many years working and leading the Uniform Patrol Division from both the street and command levels. Chief Hutchins is a 2012 graduate of the Ohio Association of Chiefs of Police Executive Leadership College.

Currently, Chief Hutchins serves on the Clark, Greene and Madison County Mental Health and Recovery board. Additionally, he is the president of the Springfield Exchange Club.