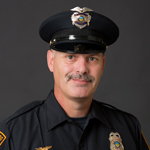 Lee has been with the Wittenberg University Police Department since June of 2014. His responsibilities include road patrol supervisor and training officer. This includes daily shift operations, Field Training Officer and designing curriculum for future training.

Lee retired in June of 2014 from the Miami County Sheriff’s Office after 24 years. He was a Crash Reconstructionist and road patrol supervisor. Duties included daily shift operations and also for the reconstruction of serious vehicle crashes.

Lee is married and has a son and daughter. In his spare time Lee enjoys spending time with his family and wood working where he shows at art shows during the year.