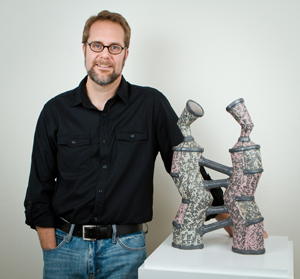 Scott Dooley, born and raised in Kansas, graduated from Bethel College with majors in history, philosophy and German in 1993. Upon discovering clay as a senior, he proceeded to work for a production potter for one year and then moved to Arizona where he attended Arizona State University and pursued art.  In 2000 he graduated with his Master of Fine Arts in Ceramics from Kansas State University where he studied with Yoshiro Ikeda.

His artwork has been exhibited internationally in Spain, Switzerland, Australia, South Africa, China, Croatia, Portugal and Taiwan, as well as throughout the United States, including New York, Los Angeles and Chicago. He is represented in many private and permanent collections in the United States and in Japan, Australia, Switzerland, Spain, Taiwan, China, Portugal, Croatia and South Africa. His artwork has been published in Ceramics Monthly, Claytimes, Pottery Making Illustrated, Revista Internacional Ceramic, Kerameiki Techni, The Chinese Potters Newsletter, Ceramics: Art and Perception and The National Ceramics Quarterly. His work has also been included in Clay and Glazes for the Potter, 500 Teapots: Contemporary Explorations of a Timeless Design, 500 Pitchers: Contemporary Explorations of a Classic Form, Eva Zeisel On Design: The Magical Language of Things, and Throwing and Handbuilding: Forming Techniques. Ceramics Monthly published an article on his work in the November 2002. In 2005 the Ohio Arts Council awarded him an Individual Artist Fellowship. He has previously served as Chair of the Art Department at Wittenberg University.

Scott has served as the faculty coordinator for Wittenberg University's Empty Bowls event since 2000. The 2013 event raised over $41,735 for the Second Harvest Food Bank, part of Catholic Social Charities of Southwest Ohio. He also serves on the Springfield Peace Center Board of Directors and volunteers at the annual SPC Summer Peace Camp.