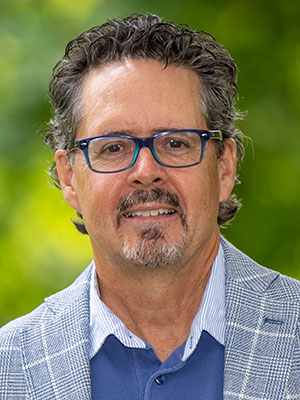 Rob Baker is a Professor of Political Science and has taught at Wittenberg since 1987. In 2010-11 he served as the Interim Faculty Director for the Hagen Center for Civic and Urban Engagement, and the Director of Community-Based Research at the Hagen Center from 2011-2013. He chaired the Department of Political Science from 1996-2003, and was Director of the Urban Studies Program from

1994-1996. He is the recipient of the 2011 Alumni Award for Distinguished Teaching, the 1990 Omicron Delta Kappa Award for Excellence in Teaching, and the 2012-2013 and 2005-2006 Melvin Latch Faculty Scholar Award. In 2015, he was awarded a Voinovich Fellowship from the George Voinovich Foundation. He was also selected to teach American Urban Governance in the International Summer Session at Fudan University, Shanghai, PRC, in July of 2015.

A former assistant to the city manager and acting city manager of Slater, Missouri he is also the founder and co-director for 20 years of the ICMA—Wittenberg Local Government Management Internship Program which was awarded a special citation as an innovative educational program by the International

City/County Management Association in 2005. Professor Baker teaches classes in American National Government, Urban Politics, State and Local Government, Public Administration, Local Government Administration, and Methodology. His research interests include state bureaucratic rulemaking, American state political culture, urban neighborhood associations, urban administration, and the role of boards and commissions in governance, particularly in smaller urban communities. In 2011 he was elected by his professional colleagues to a three-year term on the Executive Council of the State Politics and Policy Section of the American Political Science Association.

In 2015 his book Government in the Twilight Zone was published by Suny Press, and he is the editor of The Lanahan Readings in State and Local Government which is in its third edition. His numerous publications have appeared in such journals as State and Local Government Review, Western Political Quarterly, PM: Public Management, PS: Political Science and Politics, The Harvard International Journal of Press/Politics, and Legislative Studies Quarterly.

Currently, he is a regular columnist for Cox Media, Ohio and has also done on-air election and political analysis for WBLY-WIZE radio in Springfield, WYSO radio in Yellow Springs, and Fox 45/ABC 22 TV in Dayton.

Dr. Baker has been very active in local community leadership positions having served as a member and chair of the Community Advisory Review Board, co-chair of the Clark County Partnership for Success Strategic Planning Process, a member of the Health Districts Consolidation Committee, and Vice-President of the Clark County Combined Health District Board.

But his greatest passion is for the Rocking Horse Community Health Center which serves over 12,000 at-risk children and adults who otherwise would not receive primary health care. He was not only president and founding board member of the center in 1997, but he continued to serve in various leadership positions for 20 years, before stepping down in 2017. In 2005 he chaired the committee that led the organization’s transition to Federally Qualified Health Care Status which brought millions of federal dollars into the community. For that leadership effort he was named a Community Health Center Hero in 2009 by the Ohio Association of Community Health Centers. As a result of these and other contributions to the larger Springfield community, Dr. Baker was also the recipient of Wittenberg’s Outstanding Service to Springfield Award in 2004.

Rob holds a B.A. from Central Methodist College which named him the recipient of its Young Alumni Award in 1994. He also holds an M.A. and Ph.D. from the University of Missouri. In his spare time he enjoys reading, traveling the world, golf, playing trombone (formerly in the Wittenberg Jazz Ensemble), and singing in the Springfield Symphony Chorale. He is married to Dr. Mary Jo Groves, a local physician and former Wittenberg physician. Together they have four children, and two grandchildren.

Research Interests
I'm currently involved in research projects examining the role of legislative review of agency rule-making in the state of Ohio and the efforts by governors to minimize regulatory burdens.