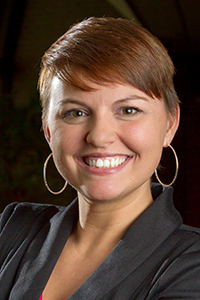 Brooke Wagner is an associate professor in the Sociology Department at Wittenberg University. She received her Ph.D. from the University of Nevada, Las Vegas. As a feminist criminologist, Dr. Wagner's academic work focuses on the intersections of gender, sex and deviance. Her work ranges from studying the construction of intimacy in postmodern society among deviant sex groups, to gender inequality within the criminal justice system, to official responses to sexual victimization.

Social justice is an important aspect of Dr. Wagner's work. For example, she worked on the Area Command Intelligence Officer (ACIO) program with the Las Vegas Metropolitan Police Department (LVMPD). She co-authored a technical report on sexual assault incidents for LVMPD titled "An Analysis of Factors Associated with Known Incidents of Sexual Assault Reported to Police." This report was used to create new policies for handling sexual assault claims by the LVMPD. She also is first author on the "Crime and Delinquency in Nevada" section of The Social Health of Nevada report sponsored through the UNLV Center for Democratic Culture.

At Wittenberg University, Dr. Wagner teaches several courses in criminology and deviance, including Women & Crime, Sociology of Deviance, Penology & Social Control, and Criminological Theory. She also teaches the mandatory Research Methods class for Sociology Majors, and she is the academic adviser for the Witt Sociology Club.