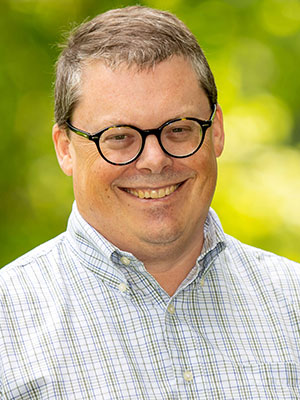 Christian Raffensperger’s academic goal has remained the same since the completion of his Ph.D. at the University of Chicago (2006)—the integration of the medieval polity of Rus into the larger medieval European world. This theme is present throughout his research and teaching.

His first book, released by Harvard University Press in 2012, won the Ohio Academy of History Publication Award in 2013 and is titled, Reimagining Europe: Kievan Rus’ in the Medieval World, 988–1146. It focuses on the multiplicity of connections between the ruling family of Rus and the other ruling families of medieval Europe; including dynastic marriages, religious ties, and trading relationships among other topics.

The marital connections of the Rusian royal family are the subject of his second book entitled, Ties of Kinship: Genealogy and Dynastic Marriage in Kyivan Rus' (Harvard Ukrainian Research Institute, 2016) which also provides a complete genealogy for the Volodimerovichi (often known as the Riurikids) through the mid–twelfth century. This project has a parallel digital humanities component that was developed with Professor David Birnbaum at the University of Pittsburgh—the Rusian Genealogy Database. Additionally, the Harvard Ukrainian Research Institute helped fund and develop a mapping component to the project which visually displays the marriages as part of their MAPA project—Rus’ Genealogy Web Map.

During his sabbatical in 2013-2014, Professor Raffensperger was resident at the Harvard Ukrainian Research Institute and was able to complete formative work on two new book projects. The first of those, The Kingdom of Rus’ (ARC Humanities Press 2017) shifts the discussion about Rus’ from a principality or a collection of principalities to one kingdom among many in Europe. It discusses how and why the titles came about, and why Rus’ was a kingdom. This book has recently been published in a Russian translation, as well.

The second book to come out of his sabbatical work focuses on intrafamilial conflicts in medieval central and eastern Europe, and how families manage those conflicts through the creation of "situational kinship networks," as a way to mitigate the effects of the conflicts. This book, Conflict, Bargaining, and Kinship Networks in Medieval Eastern Europe (Lexington Books, 2018), not only deals with conflict management, but shifts the perception of medieval eastern European polities, Rus’ in particular, as rife with “civil war” or “internecine warfare”, into polities that are dealing with conflict among families in proactive ways—deescalating conflict, rather than maximizing body counts. The goal of both of these works is to shift the perception of Rus’ in particular as one kingdom among many in medieval Europe, rather than a dysfunctional outlier.

During his second sabbatical, Professor Raffensperger worked on two books again. The first was a book written in conjunction with Donald Ostrowski and entitled, The Ruling Families of Rus’ (Reaktion Books—under contract). This book will be part of their Dynasties Series, but subverts that framework to look at how individuals and their family groups made decisions which undermined the idea of, or even the existence of, a dynasty. This book also covers a broad swath of time and territory and is not a repeat of a Russian-centric narrative, but inclusive of events in southeastern Rus’, and Lithuania as well.

The long-term project that Professor Raffensperger is working to bring to fruition is tentatively titled, "Rulers and Rulership in the Arc of Medieval Europe, 1000-1200." This expansive volume looks at political culture from Ireland in the north, through Scandinavia and down through eastern Europe. Political culture in this case is inclusive of titles, succession practices, co-rulership, relations with the church, conflict among families, and governance. By examining this zone, often viewed as peripheral to a normative view of medieval Europe, we can shift our perception about what is medieval Europe as well as what kind(s) of polities are normative; ideally leading to a shift away from an England-centric focus of political development. This is the project as well that Professor Raffensperger is working on during his fellowship at the National Humanities Center in Spring 2022.

In addition to these monographs, Professor Raffensperger has edited several volumes. Two volumes in particular are devoted to the classroom. The first of those was edited with Donald Ostrowski and is entitled, Portraits of Medieval Eastern Europe (Routledge 2018). It is a book of “imagined lives” which looks at how people from elites to slaves, lived their lives in medieval eastern Europe. The second book, How Medieval Europe was Ruled (Routledge—under contract), is in progress, but deals with how various polities were ruled in medieval Europe; including the medieval Roman Empire, Bulgaria, Norway, Portugal, the Khazars, the Plantagenet realm and much more. Both volumes provide a diverse look at medieval Europe that stretches it beyond the medieval West.

In that same theme of a broader medieval Europe, Professor Raffensperger edited a volume entitled, Authorship, Identity, and Worldview in Medieval Europe (Routledge 2022) which brings together a larger group of scholars to look once more at the primary sources to see how they constructed the world around them, and how that is different than the way that modern historians and scholars have done so.