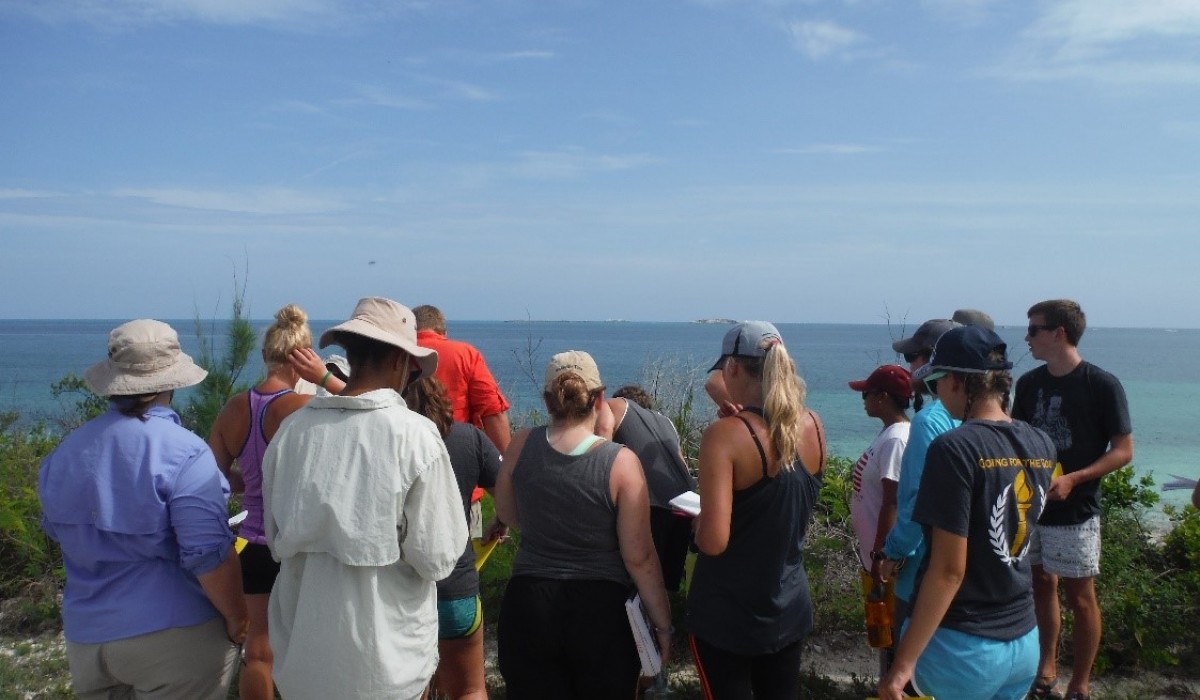 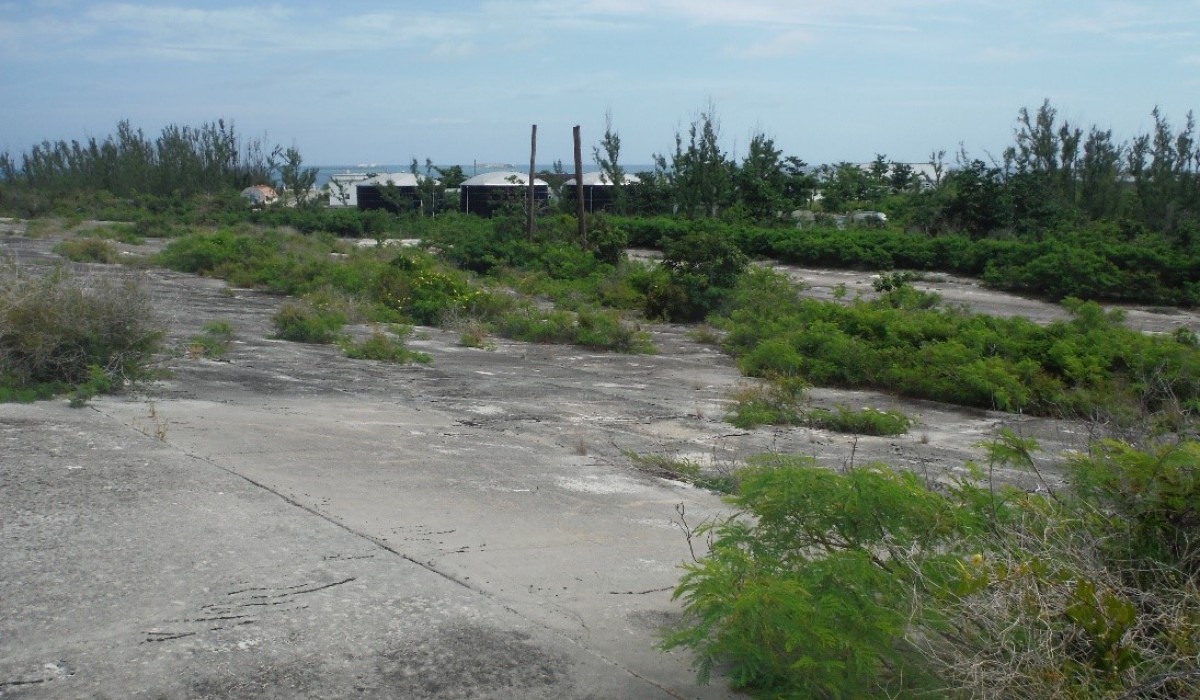 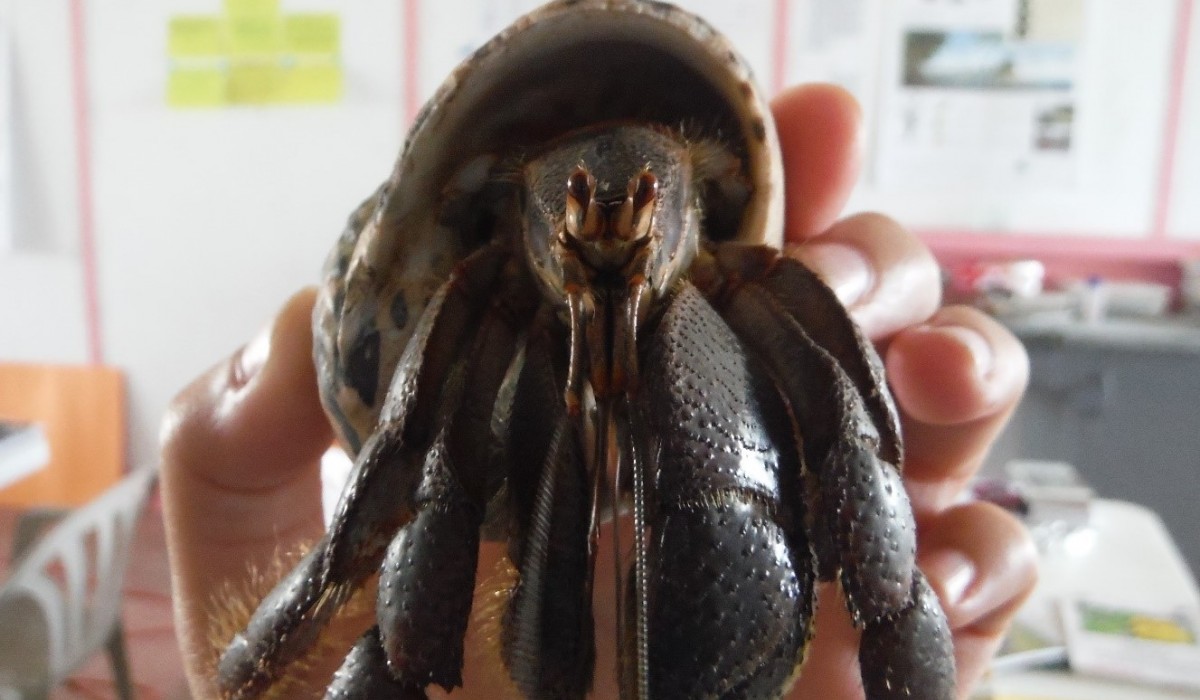 On the 18th day at the GRC, we awoke to the glorious smell of pancakes and bacon. After breakfast, we explored the wilderness surrounding the GRC. We used team work to identify different kinds of plants and their roles in the ecological system. This is the second time we have identified plants, and it was much easier to distinguish the different leaf structures and unique flowers.  We also noticed other plants we identified earlier in the trip at East Beach.

After our plant exploration, we suited up in our “bug armor:” long-sleeve shirts, pants, and bug spray. We then hiked up to the catchment basin behind the GRC. The GRC catches their own water supply: rain-water collects in a concrete funnel, then filters through a grate and is chlorinated in large tanks. There are three tanks and each have the ability to hold 400,000 gallons of water, one of which was filled 60% during a single storm while we were on the Island. We took a moment to reflect on the base’s unique history and living conditions during its time as a Naval base during the cold war.

When we had finished admiring the massive concrete structure, we all headed down in a rather cumbersome manner, through the woods to lunch. We had chicken noodle soup, egg salad, and tuna salad with red kool-aid for lunch. We all ate up and then prepared to head back out to work on our research projects.

Three of the groups set out to Sue Point to collect data for various projects. One group located Social Feather Dusters, another were searching for Flamingo Tongue Mollusks, and the third group was counting different species of coral on the reef. Each student was able to dive down to observe the organisms for prolonged periods of time due to increased confidence and skills gained throughout our stay here. These groups were able to successfully collect data due to the falling tide and lack of a strong current, which we were able to determine with our newly found oceanography knowledge.

The other groups stayed back at the GRC to continue their own data collection. Two of these groups have been testing crab behavioral tendencies. Due to this fact, there are several crab specimens throughout our lab area. Today, ten of the Sally Light Foot Crabs, extremely fast and cunning crabs, escaped. These crabs scaled the seemingly inescapable container and were loose amongst the algae and urchins in the wet lab. Several of our Wittenberg students were found on their hands and knees searching for these crabs for quite some time: only four were recovered and the rest had disappeared like magic. With the four that had been recaptured, testing resumed. These students have been testing crab reaction and behaviors to different colors of lights. So far they have tested 56 crabs of four different species!

After all of the excitement of the disappearing crustaceans, we all ventured over for dinner: which was meatloaf, mashed potatoes, and pineapple upside-down cake. The Wittenberg students then prepared for another exciting lecture from our very own Dr. Phillips. After lecture, we did a little more work on our projects and then hit the hay, preparing for another wonderful day.